Freight Wagon
The first 75 years changed Moore County from a land that had only known Indians and wildlife to an organized county with businesses and industries, three towns, one an incorporated city with a paved street, telephone service, gas and water.

Moore County might have looked much like any other frontier area in the late 1800's. Indians were attacking settlers, cattle drives and freight wagons were using the Tascosa -- Dodge City Trail and big ranches were being organized in the Texas Panhandle.

Settlers first came to the county in 1884 -- the Leverton families -- John and Mollie and George and Cora. The two families established their homes in the southeast part of Moore County. Robert and Elizabeth Spurlock came and stayed and other families began to settle. In 1890, a town was formed and named after its founder, Louis Dumas.

From that early beginning in 1884 to the present, Moore County has continued to grow -- both in population and in economics. Ranching, farming, oil and gas have given the county a stable foundation and growth has been steady for over 125 years.

In the 1860's, Indians were here, using nearby Alibates Flint Quarries for weapons and tools, and attacking settlers and cattle drives. Ranching brought questions about cattle ownership. In 1887, John Leverton and a posse had a shoot-out over cattle.

Moore County was organized in 1892 and construction of a courthouse was started. The first school was built west of the courthouse and Professor Robert Bass was teacher. A school was built in the Palo Duro area, east of Dumas, in 1901. The following year Middlewell school opened south of Dumas. In 1905, a new school was built, this time with a bell on top. The third Dumas school, a two story structure, was built in 1920.

The first recorded marriage was in 1894 when W. T. Sanders married Etta McNabb.

The Dumas Baptist Church was organized in 1892. Methodist and Christian churches started in 1900. Church of Christ was started in 1919.

In 1902, the first murder trial was held when V. M. Caraway was murdered by his wife.

The Jameson family was the first family to get a telephone. The lines were erected in 1903 on tops of barbed wire fences. 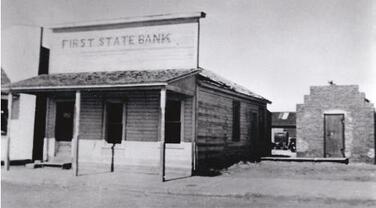 Another natural disaster came in 1918 when "The Big One" blizzard covered the county.

Cotton became a popular crop in the Panhandle and a cotton gin was built in 1922. The first bale of cotton was ginned in 1924.

Phil Baxter stopped in Dumas in 1923, stayed a few days and wrote the song "I'm a Ding Dong Daddy from Dumas."

Oil and gas were discovered in Moore County in 1925 and a few years later, in 1929, Shamrock Oil and Gas began operating a natural gas plant.

Belle Plain was a small community started in the east part of the county in 1926, but was short lived and died in 1929.

The year of 1927 was busy one with electricity, gas and water systems constructed for the city, the chamber of commerce was organized and the first edition of Moore County News was published on June 17.

By 1930, the population of the county had grown to 1555, Dumas was incorporated as a city and Sunray was organized. The Dumas theatre was opened and the city purchased the first fire engine.

In 1931, the railroad came to Dumas and the first wheat crop was shipped by rail. The Community of Etter was started, a new county courthouse was built and a library was started. 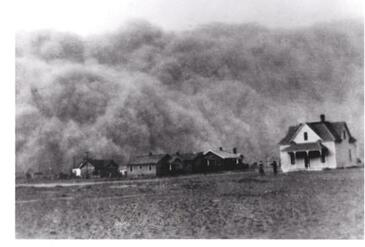 Dust Storm
The "dustbowl" started in 1932 and a bank robbery was attempted.

The next year, 1933, Charles Lindbergh and his wife made an unexpected stop on the Coon Ranch for some emergency plane repairs. Bank robbers made another unsuccessful attempt to rob the bank.

The highway going through Dumas was paved in 1935.

Industries and agriculture continued to grow. American Zinc began operating a smelter in 1936. The plant employed approximately 400, but was forced to close because of environmental problems. The plant was sold at auction in 1971.

The next few years saw several industries beginning. A carbon black plant began operating in 1937, Sunray Coop started in 1939 and in 1943, Exell Helium Plant and Phillips Chemical Plant were built.

The 1940 census showed the county population was 4461. A city hall was built in 1940 and the first airport was started east of town.

Sunray was incorporated as a town in 1942. The town of Cactus was started and a school was built there.

The 1950 census showed the county population as 13,349. That year Moore County Grain Elevator opened and work began on the Sneed Hotel (later named Flying A Hotel).

Potash Company of America was built in 1951, Sunray State Bank opened and the first county fair was held.

Elementary school were constructed beginning in 1951 with South Ward (now Sunset) school. East Ward (Morningside) and North Ward (Green Acres) were both built in 1953. Hillcrest school was not built until 1966.

The post office was built at Eighth and Bliss (now the Texas Highway Department) in 1956. 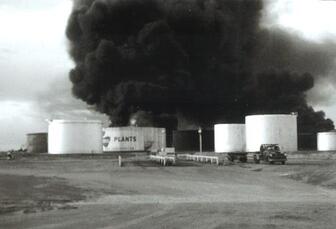 The Middlewell school closed in 1960. Kilgore Memorial Library was built. A city has was constructed in Sunray.

In 1964, DeKalb Pfizer was first seed company to construct a plant in Moore County. Funk Seed opened a plant in 1965 and Northup King in 1971.

Housing units that were constructed for workers in the Cactus Ordinance Plant in the 1940's were sold to individuals in 1964.

Texas Beef Feeders began operating a feedlot in 1967 and Cactus Feeders opened in 1975.

Pork production was growing in the county with New Way Pork opening in 1971, followed by Higley Pork Farms in 1973.

American Beef Packers, one of the largest employers in the county opened near Cactus in 1974. A big celebration was held with gifts of tee-shirts, red cowboy hats and a barbecue at the plant site. The plant has had several names over the years and today is JBS.

Moore County Historical Museum, now Window on the Plains, opened in 1976 in the ballroom of the Lew Haile Annex.

"Old Sandy," Boss Crump's horse died and the land at 14th and Dumas Ave. that was set aside as his home bcause available for sale. Construction began on a shopping center, Guylane Plaza, and a Wal-Mart store on the land where Sandy had lived.

First National bank opened in 2002 in the Guylane Plaza. The following year a visitor's center was opened on the south edge of town and was a new home of the Chamber of Commerce.

Moore County Art Association moved next to Window on the Plains in 2004 and became the Art Center.

Wind farms began appearing across the Panhandle and in 2008 the John Deere Wind Farm was opened south of Dumas.

First National Bank moved to a new building on East First Street in 2009.

Schools continued to grow with the addition of a new intermediate school at 400 Texas Avenue in 2010.

Hotels were constructed to house travelers and construction workers. Three were built on the south edge of Dumas, the Hampton Inn, LaQuinta Inn and Holiday Inn Express.

The Dumas Airport received work to extend runways to accommodate larger planes and in 2017 Hoggs BBQ was opened at the airport. The well-known Albert's restaurant closed in 2019, but was quickly reopened as Big County Restaurant.

A fire destroyed the Star Theatre and Oak Lanes Bowling Alley in early 2019.