Louis Dumas was a Visionary 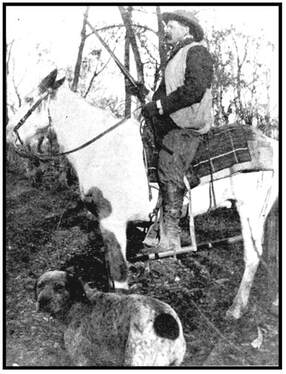 Louis Dumas had a vision of starting a town on the wide-open plains of the Panhandle. At age 34, he and the other in the Towns Site Company did just that in 1891.

The harsh weather of the Panhandle and the crude living conditions made staying here hard. In 1896, the family returned to Van Alstyne and remained there. It is not known if Dumas ever returned to the town that bears his name.

A newspaper clipping from the Sherman, Texas newspaper shows a different side of the successful businessman. The story is untitled and was obviously written by a member of the newspaper staff who knew Dumas well.

"Louis Dumas of Van Alstyne, is in the city. Louis is a veteran hunter. For over thirty years he has been going to the woods and will keep up the practice as long as he lives. We will never forget the first time we saw Louis Dumas and he will never forget it either. It was about twenty years ago over on Allen Bayou, Chickasaw Nation, an ideal hunters' paradise, the like of which will never be seen again in the Indian country or the Southwest."

"The lay of the country was beautiful with the open woods and stretches of lovely prairie. The whole country was literally alive with deer, wild turkey, and all kinds of feathered game, thousands of prairie chickens, quail and wild duck. We passed one entire winter over there in a lonely cabin. Our nearest neighbor lived ten miles away. Our sole companion was Dick Maughs, uncle of the Scholl boys. There was never a day that wild turkey, deer, ducks and squirrels did not gang at our cabin. We were in the woods several weeks before we were discovered by the cowboys who now and then passed through that country. Ever after, it was their stopping placed.  The latch string always hung outside. We might fill a whole volume of delightful reminiscences of that winter passed in the woods. Every night the wolves would come almost to our cabin door and give a serenade. And often we'd hear the pathetic cry of a panther that sounded like a lone woman in distress and the weird laughter of the owl in the thicket."

"The second winter, we met Louis Dumas with his pack of hounds. To our minds eye, we can see him coming through the woods with a fine doe to his saddle and hound trailing after him. There were a few laggards that were being called by the sweet notes of the hunters' horn that made the woods fairly vibrate with melody."

"As Dumas sat on his shores, with his rifle across the pommel of his saddle, his form erect, we thought him one of the most splendid specimens of manhood we ever gazed upon. That was twenty years ago, yet Louis Dumas is still a very handsome man and just as much in love with wood-life as ever."

Dumas was born in Pilot Grave, Grayson County, Texas in 1856. He was one of twelve children of James Pinckney and Mary Ann Dumas. He married Florence Emberson in 1879. They were parents to two sons, Lamon and Fred, and two daughters, Johnnie and Mary. Johnnie was the eldest. She died in 1888 at age six.