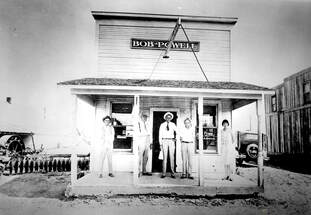 Bob Powell office, 1914
It took a lot of vision for a young man of 20 to leave his family, travel over 300 miles to come to Moore County in 1900. Bob Powell was such a man. He came to this wide-open county and stayed to help shape Moore County.

In a story in a 1966 edition of the Moore County News Press, Bob was described as having "an optimistic faith that could look beyond the virgin buffalo grass sod of 1900 to today's thriving North Plains."

His parents were Mr. and Mrs. J. H. Powell who lived in Throckmorton County in the little town of Woodson. He was christened Frank Roberts Powell, but no one ever called him that. He was always just "Bob."

When he came to Moore County, Bob filed on a section of land north of Dumas near Machovec Switch on the Santa Fe Railroad and began farming. He also worked as a cowboy for a neighbor, W. C. Parks.

Bob was a member of the original townsite committee. W. J. Morton was president and Bob served as secretary. He sold the new community with "force and optimism."

In 1903, a young lady, Loula B. Parker, from Burnet County came to visit her sister and husband, Mr. and Mrs. J. A. Wallace, who ran a hotel on the southwest corner of Dumas Avenue and Sixth Street. Following a brief courtship, Bob and Loula were married October 4, 1903.

In 1908, Bob was elected county clerk and began working to index land records, which led him to start an abstract business that same year. The business grew to include insurance and real estate. For 80 years, there was a member of the Powell family involved in the business. The business is still a vital part of Dumas. That same year he was one of the organizers of First State Bank and one of its original directors and officers.

Bob owned the first bicycle in Moore County and on May 2, 1908, he owned the second car registered in the county, a Reo. According to an interview in the Moore County News Press, he drove the car "over the open countryside to show land to prospective buyers." A number of early Moore residents not only bought their farms from him, but also got their first car rides from him.

Another first for Bob was the construction of a house in 1906. It gave his family the luxury of the first bathtub inside the new house.

The couple were parents of three sons, John R., Bob Jr., and Walter. They had four grandchildren, Ted, Dick, Jerry and Ann.

John R married Thelma Makeig, who was born in a half-dugout during a blizzard with Dr. Anthony as attending physician.

Bob Jr. married Evelyn McMurry and they were parents of Ted. They purchased the first movie theatre in the late 1920's. It was located on the corner of Seventh Street and Dumas Ave. The McMurry's expanded their theatres to include the Star Theatre, Evelyn Theatre, and the Prairie Drive-In.

Walter married Mattie Lee Geary and they were parents of Dick, Jerry and Ann. Walter worked in the abstract business his father started and after the business sold in 1988, he maintained an office in the building.

Family was important to Bob and letters to his sons while they were in college reflect his desire for them to succeed. He also corresponded with is mother frequently and planned fishing trips to Red River when his parents visited.

In a letter to his mother shortly after the birth of his grandson, Ted, in 1927, Bob wrote "He's a cracker jack. He hardly ever cries and it is easy to make him laugh, and when he laughs he has a sort of catfish mouth."

When Dumas began a growth period in 1927, Bob was a key organizer of the first chamber of commerce and became its first president, serving for eight years. J. C. "Jake" Phillips was vice president and Noel McDade was treasurer.

Walter remembered "Dad had 15 abstractors working here. He hired an attorney to check out the abstracts and we still couldn't keep up with the demand."

When Dumas Independent School District was created by an act of the Texas Legislature, Bob became a school trustee and served for many years.

Bob served as secretary of the local draft board for the duration of World War I and as county surveyor from 1918 to 1920.

He urged the incorporation of Dumas as a city and when this was accomplished in 1930, he and J. V. Mills were the first two city councilmen. They tackled the detailed job of setting up city laws and arranging for city water and gas. He was a member of the city council when he died.

According to the newspaper interview, "Perhaps his greatest effort was encouraging the Santa Fe railroad to run its new Amarillo-Colorado line through Dumas. He figured prominently in the celebration that welcomed Santa Fe when the railroad reached Dumas in 1930."

When he died suddenly in 1932 at age 52, all businesses in the town closed for the afternoon of his funeral services.

Bob left an impact on Dumas and Moore County and it was not just his name on a business. He worked hard to help the county grow into what we have today. According to one newspaper article, "He was rarely idle from some project that helped the young county develop."