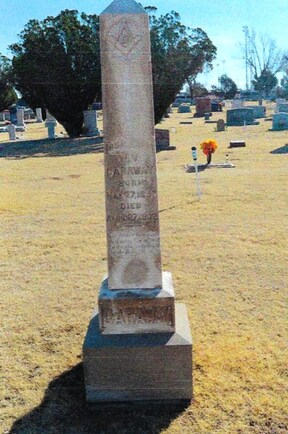 Early Moore County was a peaceful settlement of scattered homesteads with people struggling to make their homes and establish farms and ranches. That peace was broken one Sunday when the first murder occurred, but quickly solved with help from a dog.

William Vestal Caraway and his family came to the county, filed on four sections of land east of Dumas and established a homestead. He was born in Hemphill, Texas to N. J. and Mary Caraway. He married Sarah Inez Wilson and they became parents of six children. The couple moved often before settling in Moore County. Each of their children were born in different places.

William was a lumber salesman and was away from home a lot. The last weekend in April in 1902, he was home and had taken the children to church that morning. Later that Sunday, Sarah came running to the W. C. Stephens home, asking for help saying her husband was deathly ill. Mrs. Stephens and Wiley Fox returned with Sarah to the Caraway home where they found William dead.

Since William had a history of heart problems, they assumed he suffered a heart attack.

The suspicion that Sarah had committed murder was aroused the next day at the time of the funeral. Several women had come to the home to help with food and other chores. A large black dog came with the ladies. Scraps of food from the night before were thrown out and the dog ate the scraps. He died immediately.

That same morning, Mr. Fox was returning to town. He noticed the prints of the Caraway's pet pig in the muddy road. They followed the prints of Sarah from the night before. The prints turned and led off the road where Mr. Fox found a quilt and an empty bottle. He turned the bottle over to the district attorney for analysis. The test proved it was strychnine.

Sarah was questioned, she confessed and was placed in the Channing jail since Moore County did not have a jail. During the confession, she said she wanted him out of the way. While William and the children were at church, she had put the strychnine in his heart tonic. That night he took his medicine. When he realized he had been poisoned, he begged for some eggs and grease to counteract the poison. She gave him the eggs and grease, but poisoned both before giving them to him.

The case was heard by the grand jury the day following the murder. It was taken to trial the following day and she was found guilty. During the trial, several witnesses were called including four of her children, Ben, Annie, Inez, and Willis.

Other witnesses were W. C. Stephens, Wiley Fox, J. D. McAdams, D. A. Leak, R. A. McNabb, J. O. Whittington, W. A. Caldwell and H. A. Beauchamp. Charles B. McLain was jury foreman and read the verdict of guilty.

She was sentenced to 99 years in prison. She was taken to Huntsville where she served only six years before she was pardoned by Gov. F. M. Campbell on the recommendation of the prison warden. The pardon read, in part, "suffering from Bright's Disease" and in the opinion of the prison doctor, "would not live very long." He asked the governor for a "full pardon and restore her to full citizenship." The pardon was dated December 16, 1908.

After she was released from prison, she later married a Judge Cooper and died in Hot Springs, AK, in 1936 or 1937, at approximately age 70.

The five younger children were taken to live with a paternal uncle, N. J. Caraway, in DeSoto, LA. The oldest, Ben, was 17 at the time and went to New Orleans where he worked for a furniture store. The other children were fifteen-year-old Annie, twelve-year-old Edwin, ten-year-old Inez, eight-year-old Willis, and five-year-old Clara.

Ben eventually moved to Houston where he opened a furniture store and brought his brothers into the business. According to the family, "he took care of his siblings, all of whom followed him to Houston."

A tall stone marker in the south part of Dumas Cemetery is all that remains to tell the story of Moore County's first murder.