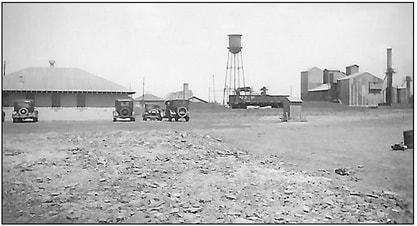 American Zinc Plant, 1938
The American Zinc file in the archives room at the museum tells the story of the hot, hard jobs done by workers at the plant.

The plant opened in 1936 and had two furnaces blocks, a roaster, a sintering machine, condenser and retort producing facilities. These were used to produce zinc. When the plant opened, it was one of the smallest horizontal retort zinc smelters in the country. It grew to become one of the largest zinc plants inthe country.

It became apparent in the mid 1940's that due to the high demand for zinc, the plant needed to be enlarged. Additional blocks of furnaces were added and the plant continued to grow. The smelting plant was an important part of the defense program during World War II. The ore was imported from Mexico and the Santa Fe railroad brought in the ore and shipped the refined zinc. The plant produced 155 tons of zinc per day.

The plant was used as a Prisoner of War camp for Italian prisoners during World War II. The flagpole that stands near the playground at the museum was made by the prisoners while they were at the plant. 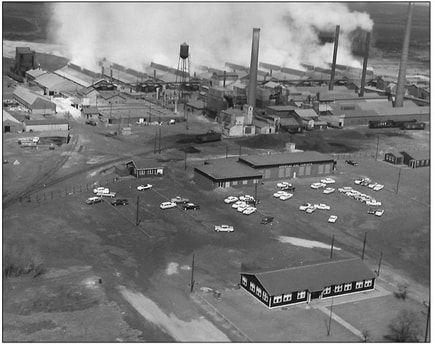 American Zinc Plant, northeast of Dumas, called The Smelter
On the southeast corner of the plant property was a development of over 40 houses for workers and their families. There was also a grocery store and a cafe.

One of the families that lived in the housing units was the Brown family who came from east Texas to go to work. The move was not an easy decision for the family who had been farming near Paris, but the promise of $3.40 a day swayed their decision. The Browns and four of their five children made the move. The oldest son was in the service. Donnie was twelve years old in 1943 when the family moved to Dumas.

He found that life at the "smelter" offered, not only better pay for his father, but many activities for children of the workers. Baseball and volleyball teams were organized and the opportunity to take part in various other activities were offered by an activities director who was in charge of the "Rec Hall". Uniforms for the teams were provided and a bus as available for transportation to games. Areas were set aside for pitching horseshoes or washers.

The two-bedroom units for each family was part of a long row of apartment like units. Each rented for $5.50 a month. An area was provided for gardens in the families wanted one. The space would be plowed and water was available. 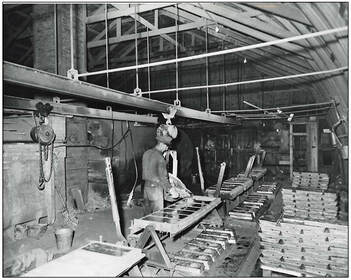 Worker at the American Zinc Plant pours molten zinc into forms to prepare for shipping
Two school buses were furnished to take students to school in Dumas. Donnie remembers one bus driver in particular who expected well behaved students on his bus. If a student was disruptive too much, the driver would stop the bus and remove the student. It didn't matter what the weather was, the student would be left beside the road and the bus would go on without the student. For the most part, Donnie said the students were pretty well behaved.

Donnie was part of the 1950 Dumas High School graduating class, the first at the new high school.

During World War II, the smelter became a location for prisoners of war, mostly Italian soldiers. Donnie became friends with the guards and often would trade one of his newspapers for candy or gum. Both were special treats because they were not easily purchased during the war. The prisoners and the guards were provided food by the federal government, so some food was available for them that was not available at local grocery stores. Donnie also would talk with the prisoners through the fence, most of whom spoke very good English. The fence was made of barbed wire with razor wire on top to keep the prisoners inside. The wire was probably unnecessary because the prisoners liked being in the American Zinc camp even though the work they did was hot and hard. Most of the prisoners were very young. When they were released and sent back home, most wanted to stay here. 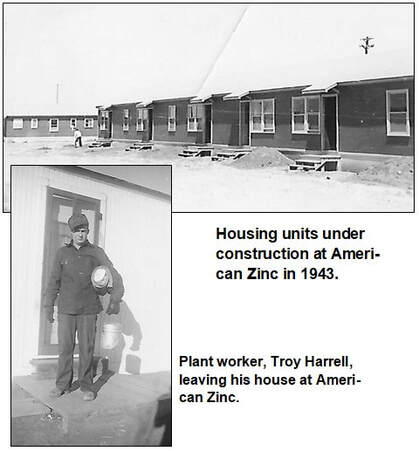 The prisoners not only worked in the smelter, but did work in the housing area -- like building sidewalks and painting.

It was hard to find enough workers at the plant during the war. The federal government would bring large groups of Navajo workers from the Taos area. One group would work for several weeks, supervised by one of the chiefs of the tribe, then another group would come to replace them.

The housing units were closed in the 1950s and the houses were sold and moved away.

The plant was a vital part of the economy of Moore County for decades but was forced to close because of environmental issues. The closing caused 285 workers to be without jobs just before Christmas in 1970. The plant was sold by auction in 1971.

The buildings and furnaces were dismantled and skeletons of the buildings remained for some time. The large smoke stacks stood in the middle of what was a major industry for the county. The smoke stacks themselves had a little history. They were considered, but not used, for the scene in the movie "Smokey and the Bandit" where "The Bandit" is running from "Smokey" and the smoke stacks are falling around him. 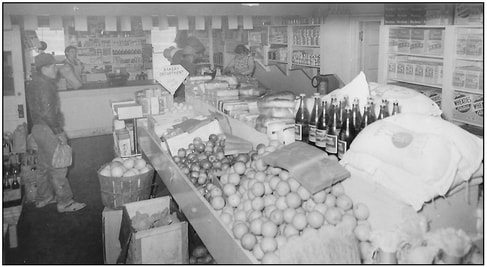