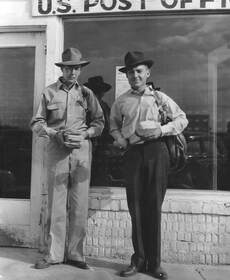 Postal Carriers
Louis Dumas must have been a young man who knew how to get things done! He came to Dumas at age 34 with a vision and immediately started to work to make that vision happen.

In 1891, as the town was growing from the open plains to a frontier town, the townsite was being surveyed. Louis Dumas had come from east Texas to establish a town and he was overseeing the plans for the town that would bear his name.

He knew postal service was important to any area and the mail came to the new town only twice a week. It came by railroad to Hartley. There it was picked up by horse or buggy and carried straight across country to the post office at Coldwater.

Louis Dumas made application with the Post Office Department on May 11, 1891 for the establishment of a post office at Dumas. On April 22, 1891, W. D. Twichell had started surveying and platting the town and 2 ½ weeks later the documents were filed for the post office.

The document claimed that Dumas had 30 inhabitants (he must have counted the dogs and a few horses according to 100 Moore Years). He also stated the post office would serve 50 people. Less than two months after the document was signed, Dumas was granted a post office. James C. Wilson was named first postmaster.

Several mail routes were used in Moore County. One route led to the way station of Trumble where there were two or three business stores, a post office and a dryland lake. From there it came to Dumas. Outgoing mail was picked up from Dumas, then taken north by mail hack or two-wheeled gig into Hansford County and the Zulu station. Mail was brought into Dumas on Mondays and Thursdays and taken to the Zulu station on Wednesday. This was all done within a week. 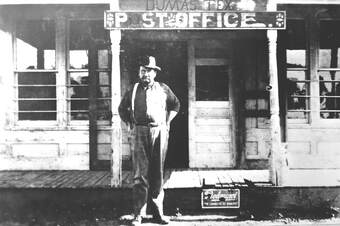 During the years, there have been 15 post offices in Moore County. Today only three remain.

It was almost twenty years before more post offices were added. Belle Plain opened in 1929, Altman (which became Sunray) in 1930 and Etter in 1931. When the application for the Altman post office was sent in, another post office was found in Texas with the name Altman. The name of the town and the post office was changed to Sunray in honor of Sunray Oil Company which was operating in the town.

Home delivery did not start in Dumas until October of 1947. At that time two routes were set up. Route One was the east side of town, carried by James White and Route Two was the west side, carried by Andy Alexander. Today Dumas is served by eight home delivery carriers.

​​Compiled from: Articles from archives at Window on the Plains Museum
​100 Moore Years
More Bits of History