First School was in 1892
By Glynda Pflug 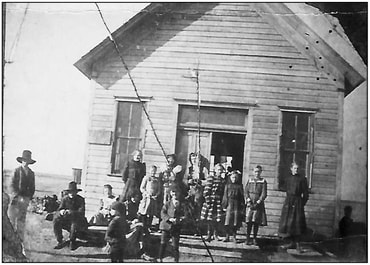 First Dumas school. Built in 1892. Located at Seventh and Porter
As people came to Moore County in the late 1890's and early 1900's, schools became an important part of the county development.

The first teacher was Professor Robert Bass. His school was a one-room frame building about 25' x 15'. It was located at Seventh and Porter. The year was 1892. Some of his first pupils were Charlie and Henry Jameson, Sula, Houston and Marvin Beauchamp and four McAdams girls.

The second school in Dumas was a two-story frame structure with a bell tower. It was built in 1905. A second room was added later.

The third school was also a two-story structure built in 1920. The second story was used for an auditorium.

Other school were scattered throughout the county. A teacher would be hired to teach small groups of students in the area of their homes. The teacher would live with a family and would be paid from $25 to $100 a month. In addition to salary, they would receive room and board.

The Palo Duro school was northeast Moore County and was active from 1901 to 1960. The Skelly school, later called Armstrong, was teaching students from 1928 to 1964. Records show that in 1956, there were nine teachers and 137 students at the school.

The Middlewell school started in 1902 and was in the western part of the county. Starting in 1961, elementary students were bused to Bivins School and older students attended Dumas High School. The Bivins school was one of the large county schools. It was south of Dumas and was active from 1928 to 1978.

One of the earliest county schools was in 1893 at the home of S. A. Bull, Moore County's second sheriff. Other county schools were Haile, Jones, Harbert, Phythian (Jackrabbit College), Clark, Hayes, Haycreek, Baldwin, Lake View, White Hall, and McAdams.

Second school, built in 1905, had a bell tower.
The White Hall school was established in 1906 and was just southeast of where Sunray is now. The school was also a place of worship. The people in the district had a hard time naming the school. Finally, out of disgust, one of the men said, "Let's paint it white and call it White Hall." The name stuck.

The McAdams school was in the northern part of Moore County near the Sherman County line. Miss Ollie Taylor was hired by Grandpa W. J. McAdams for $25 a month plus room and board. The school was help upstairs in the McAdams two-story home. In 1903, McAdams had to finance the hiring of a teacher to teach the Wilson's and McAdams' children and the daughter of Gus Gober. Neither Sherman or Moore County would pay for the teacher because it was not determined which county the school was in.

One of the early rural schools was built of materials from a washed-out Tascosa bridge of the Fort Worth and Denver railroad. Cross-ties and other square-sawed timbers floated down the Canadian River and lodged along the banks. Then, the timber were hauled by George Leverton, R. A. Spurlock, and I. A. Foreman and their sons. The school was located centrally from the three families. The one-room building and the benches were constructed from the timbers. The Levertons lived up-river in Evans Canyon, the Spurlocks were mid-way in Martin's Canyon and the Foremans were down-river in Foreman Canyon.

A half dugout was used for a school at the Jeff Crawford's farm in the south part of the county. Miss Ola Feltz was the teacher. One day young Clayton Flack decided he would leave school and he did. Miss Feltz took after him on her horse and brought him back, tapping him with her quirt every time he balked.

Miss Carrie Clark taught one of the early years at the Palo Duro school. There was one uncaught villain during her two years at the school. On the way to school, one of the boys caught a bright colored lizard that was crossing the road. The group of students discussed what to do with it. They decided it would be fun to put in in the teacher's lunch basket, but none of the boys would do it. Finally, Altha Morton volunteered. During recess, she placed the lizard in the basket. The lizard ran out and she threw both hands up, dropping the basket and gave a shrill panther-like scream, to the delight of the students.

Later that day, all the boys were called in and questioned. Again the next day, there was a session with each separately. The culprit was not found. Years later, Altha admitted to her former teacher that she was the guilty one. Miss Carrie said, "Altha Morton, I'm a notion to strap you for doing that."
More Bits of History