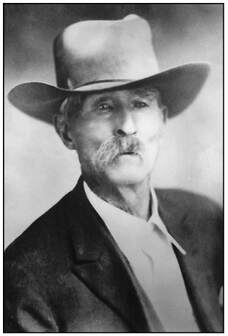 Salon Bull
Salon Bull came to Texas with his emigrant family in 1853. The family came from Alabama and had just crossed into Texas on November 28, when Salon was born. He was fourth of ten children. The family settle in Erath County near Stephenville.

At age 21, Salon was following a herd of cattle when he came to the Panhandle. He worked at various ranches in Northeastern New Mexico and in the Texas Panhandle, usually about six months at each ranch. He came to Moore County and filed on some land on the South Palo Duro Creek in eastern Moore County in 1892.

He and his family made their home in a tent until Salon found a house in Dumas and moved it to his land.

Salon became known for raising horses. There was a demand for the cow ponies he bought, trained and sold. He had bought a famous Figure 2 herd from John Reynolds in Marbleford County and brought them to Moore County in the summer of 1893.

The horses were fleet, sure-footed, small and wiry. They were exceptional blooded stock with strains of Arabian. He kept from 1500 to 2000 of the well-bred horses.

Cowboys would travel from long distances to buy a Bull-trained horse.

Salon had special help in training the horses -- his oldest daughter, Edna. He often came to the house and asked his wife, "I got two hired men down here but neither one knows how to lead a bunch of mustangs into the branding pen. If you're not using Edna, I'd like to have her for a couple of hours."

Each day they brought the cow ponies into town and watered them at the courthouse well. The horse always received lots of attention from the townspeople and cowboys who were in town. It was good advertising.

Edna attended school at small schools in homes of neighbors. One of the schools was in 1895 on the Figure 2 Ranch where the Bulls lived. When she was older, she took an exam and got a permit to teach. From her salary, she saved $50 and ordered a special saddle with a third horn to give her more stability when she was working with horses.

In 1901, Mrs. Bull's health weakened and Bull sold his Moore County herd and moved to Southeast Colorado for her health. In later years, he returned to the job he loved -- working with horses.

He died in July of 1932 and the headline in The Dalhart Texan, using the colorful language of that era, stated "S. A. Bull, Panhandle Pioneer and Beloved Character, Dies While Still in Harness."  The paper described him as "The day opened in Dalhart as the old man made his rounds, cane in hand, bronzed old face, surmounted by his Stetson, skin tanned by the suns of may summers, wrinkled into a smile, 'Good morning, good morning,' came the old southern drawl. Then he'd crack a joke or two, and he was gone -- on to the next place."

The obituary described him as being active to the last day, "Even Friday, the day he took sick, he was up at 6:30 and downtown, campaigning for some of his favorites in the coming Democratic primaries. That day he was busy up and down stairs, checking up on this one and that one. That evening, he felt badly; that night he became worse; Saturday noon his condition was critical. Heart disease claimed him at last."

The newspaper described him as "Companion of old Col. Goodnight, an Indian fighter, and peace officer, he was one of the most unique and picturesque figures of the Old West, that the modern Texas knew."

The paper described him as "Hero of Indian battles, center of some of the historic highlights in Texas cattle history, Mr. Bull was a rare character. Though, he had risen from cowboy to ranch owner, from a babe in the prairie schooner to a man of power and influence, he embodied the spirit of the Old West, the open-hearted generosity of the cowboy, the pungent, the striking language of the range rider, the fearlessness of the old Indian fighter that he was."

He and Col. Goodnight were friends. Bull helped establish and promote Goodnight Academy at the town of Goodnight. All of the Bull children were educated there, achieving an education equal to a junior college.

The obituary in the Dalhart paper tells, "Among his experiences was that of knowing John Wilkes Booth, the assassin of President Abraham Lincoln. History tells how a posse trailed Booth and that he was in a house that burned. Later, proof was established, almost beyond a doubt, that he had lived to died a natural death. Mr. Bull knew him in Oklahoma."

He had left his mark on Moore County as he had in other places. Moore County was like other sections near the notorious Oklahoma strip, infested with bad men in the late 1893. He was drafted to serve as a sheriff, completing two terms. He also served as county commissioner.

He and his daughter, Edna, remained well-known for their Figure 2 herd of horses and their training here in Moore County.

The Salon Bull Family on the Figure 2 Ranch. Left to right: S. A. Bull, Errard Bull, Ruth Bull, Mrs. S . A. Bull, Cabe Bull, Leona Bennett (school teacher), Edna Bull and Leigh Bull. Part of his herd of horses are in the background. Taken in 1895
More Bits of History