Growing Cotton in the Panhandle
By Glynda Pflug 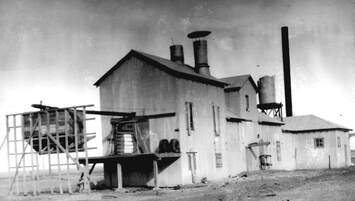 1920's Cotton Gin
During cotton harvest time, loaded trucks keep the roads busy hauling cotton to the gin. When the cotton season is over usually the growers are happy with the results of the harvest.

After the winter of 1919 where blizzard was followed by blizzard, Moore County farmers were looking for crops better suited for the Panhandle. According to W. J. Morton, Jr. in his book, Snowstorms, Dust Storms and Horses' Tails: "Something had to be done. Everybody in the country that had any cattle was hit and hit hard. Farm produce went down to nothing and you just couldn't get hold of enough money to hardly live."

O. B. Burnett had moved to Moore County from Hall County and was a cotton farmer "and a good one" according to Morton. He had studied the cotton plant and produced a drought-resisting acclimated cotton that would mature in 90 to 100 days. Burnett thought the area would be suited to raise cotton. Cotton was still a fair price and Burnett recruited lots of people to say they would plant cotton.

According to the Morton book, "Of course, there was no gin in the country. Morton Sr. and Burnett decided to "try to build a gin by subscription." Burnett gathered money locally while Morton Sr.  went to Amarillo and "got quite a bit of money subscribed by Amarillo citizens." According to the Morton book, "Some told him they would never get the job done even though they were contributing a little money to the project." They raised $6,000 for the purpose of constructing the gin at Dumas, the first constructed north of the Canadian River.

Burnett was the controlling stockholder and the gin was built under his supervision in 1921-1922. It had the capacity to gin 20 bales of cotton a day.

When the cotton was ready to be picked and ginned, the gin was ready. Tom Mills ginned the first bale, according to the Morton book. Other sources credit the first bale to O. B. Burnett and another to W. W. Burnett. 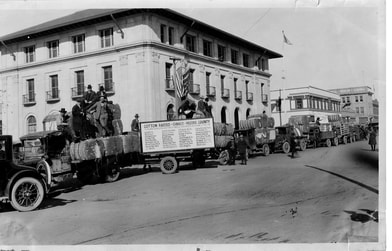 Cotton parade in Amarillo
When the first 100 bales were ginned, a bunch of surplus World War I trucks were secured to haul the cotton to Amarillo for a parade down Polk Street tot he surprise of many of those who thought they would never get the gin built. The parade was followed by a big banquet.

Later in his book, Morton says, "Boy! Things really happened this year of 1923. There was cotton, cotton, and more cotton, acres and acres of it. Every field was alive with cotton blooms. A beautiful sight." In 1923, the yield was 1400 bales selling at 30 to 35 cents a pound.

In just a few short months, Moore County had become the cotton capital of the North Plains and Burnett had earned the title "Father of Cotton."

"The trappings of our trade were changing as the trade had changed. We donned bibbed overalls, brogan shoes, cotton gloves instead of dragging a rope, we were dragging a cotton sack."

"We had lint in our teeth, in our ears, in our hair, and in our whiskers. In fact, we were so linted up, we resembled a bunch of mangy dogs or calves. There was one class of people who thought we really looked good for cotton was one commodity that the bottom hadn't yet fallen out of the price -- the banker. He thought he would get part of that cow money back we had lost in the cow business."

"Even the grocery man got on speaking terms with us again. He was looking for a little money to come his way instead of groceries going out the door."

Morton Jr. remembers his experience with picking cotton, "As for me, I wasn't much of a cotton boy in the first place. I remembered that I had tried my hand at picking cotton when I was a small boy down in old Greer County. My hands just wouldn't fit a wad of cotton no way I could fix it. The ones who did the weighing had it in for me of course. A whole sack full wouldn't weigh hardly anything if I picked it. It took too long to get a sack full if it was packed down in the sack. I'd go in at night and tell Mother how much I had picked that afternoon and them some 'Boob' would come in and tell how much I picked in pounds. Results! I was led out and given a good thrashing. I got to be a fanciful dancer to the tune of a switch  swishing through the air."

"I wonder sometimes if I had kept up cotton picking if I would ever have enough cotton picked to have taken care of the seats of the britches that would have been worn out by those switches."

The cotton business kept up for four or five years and possible a little longer for some. It just gradually passed out of the picture. There were so many other things that could be done with a lot less trouble and work.

Part of the reason for the drop in cotton farming was the difficulty to find pickers. Also, the price of wheat rose and cotton prices fell.

The gin was finally dismantled and sold in the 1930's.

Cotton farming continued to decrease during the next decades until it became popular again in the early 2000's. Water for irrigation and modern machinery were big factors in the revival of the cotton industry in this area. The current cotton gin was constructed in 2005 and each year tops the number of bales from the previous year.

Compiled from:
Snowstorms, Dust Storms and Horses' Tail by W. J. Morton
Archives at Window on the Plains Museum