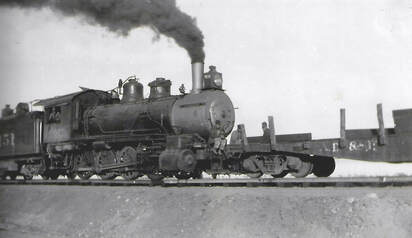 No single event marked the change in Dumas from a small cattle town to a thriving industry and agriculture center like the coming of the railroad did.

Work began in 1929 to petition Santa Fe Railroad for a link coming through Dumas to connect Amarillo with Boise City and other towns north.

A railroad committee of Bob Powell, W. J. Morton, Noel McDade and Julius Weilding worked with Santa Fe and then with the Interstate Commerce Commission to secure the railroad.

A major part of the construction was a bridge to cross the Canadian River. The bridge was started in June of 1930 and was completed in May of 1931. Cost of the bridge was $1 million and two men's lives. It was 1736 feet from cliff to cliff and was 115 feet above water. The bridge rested on piers set 110 feet into the river bed.

The bridge was built from both sides simultaneously and met in the middle within one inch of each other. The construction used 3216 tons of structural steel, 14,000 cubic yards of concrete and 87,000 rivets. 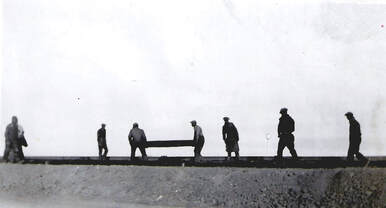 The first train came to Dumas May 29, 1931, and was a day of celebration for the entire Panhandle. The town shut down to join the celebration. Neighboring towns came to join the festivities. Dalhart brought a caravan including a band. When the train arrived, it brought 160 residents of Amarillo and the 142nd Infantry Band. Everyone joined in a parade that ended near the courthouse where the Methodists had a revival tent.

The coming of the railroad caused rapid change in Dumas and Moore County. Dumas grew in population from 315 to 1152 in less than a year. Businesses increased from 32 to 110. The railroad brought four mail services to town instead of two. It created a multitude of outlets from selling cream and farm products to shipping wheat.

Three elevators started construction. Residents voted to sell bonds for $150,000 to construct a courthouse. In the same election, it was voted $250,000 in bonds to pave Highway 115 which ran from Four Way to Stratford.

Land sales doubled and more land went into cultivation. Acres that were sowed in wheat grew from about 70,000 acres to 150,000. 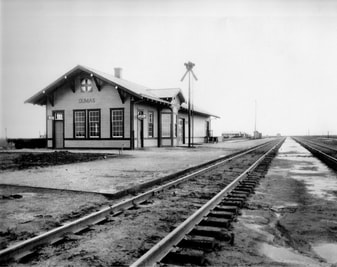 The depot was sold and moved from Dumas. It has now been remodeled and is a gun shop in Oak Hills, Texas.
West Texas Utilities purchased utility rights for the city and spent thousands to construct water and lighting systems. Sewer bonds were approved and curbing and gutters were constructed to make way for paving. A $150,000 bond was voted for school construction.

He saw traders using the Trail to market goods and emigrants and their wagons going west. He knew a railroad along the Trail was the answer for both commerce and travel, but capital was hard to find. His idea was not easy to sell and often was called "two streaks of rust".

He did not let his dream die and the dream came true for Dumas on May 29, 1931, when the Santa Fe Railroad to Dumas for the first time.