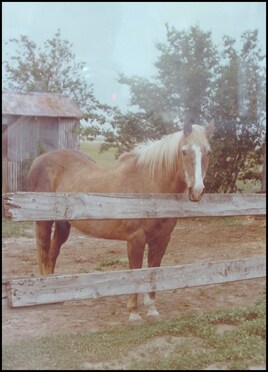 Sandy the Golden Palomino
The Sandy legend began in May of 1951 when the golden palomino was foaled on a ranch in New Mexico, owned by J. C. King.

Richard Lane "Boss" Crump and Russell A. "Ick" Reed made an agreement to purchase the palomino and another horse as a partnership. Charles Black, L. S. Brown and Reed traveled to the ranch north of Clayton to pick up the two horses.

The horses were used in riding events and parades. The second horse was later sold, but the partners never got rid of Sandy. Dressed in parade saddle and gear, he became a well-known part of the annual Dogie Days event for several decades.

Over the years, Sandy was used some to herd cattle. The last time was after the blizzard of 1957. Cattle were scattered all over the Panhandle and Sandy was put to work -- and worked hard, according to Reed, in the roundup that spring.

The last time the horse was ridden was for the 1966 Dogie Day parade. Then, he was retired to his home where he remained until his death.

The Partners
Crump served Moore County as sheriff from 1925 to 1929. He was a walking history of Moore County from the time he arrived in 1892 on a cattle drive from Henrietta at the age of 21. He worked as a cowhand, led cattle drives and was a successful rancher.

He was credited with rounding up votes in an election to organize the county in July of 1892. He brought in cowboys from all over the area with "light regard" for residence requirements.

Crump and his wife, Guy Edwin Scott, lived on their ranch southwest of Dumas. He retired in 1945 and moved to 1124 S. Dumas Avenue and legend is, when he died, a 1937 Packard automobile with very few miles was still in his garage.

Reed also served as Moore County Sheriff, starting in 1971, following John Easley, who died in January of that year. He was elected that fall from a field of seven candidates.

He came to Dumas in 1937 at age 18. He first worked for Phillips Petroleum Company and later as a truck driver, a job he held until he entered the U.S. Army Air Corps in August, 1941. After his discharge from the service, he returned to Dumas to open an automobile salvage yard. He opened his radiator shop in 9157, When he was elected sheriff, he leased his radiator shop to give his full attention to the sheriff's duties. 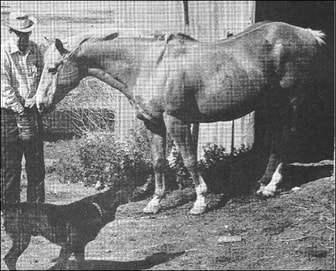 Russell A. "Ick" Reed and Sandy
The Friendship
Crump and Reed became close friends in the 1940's and spent much time together until Crump's death in 1959 at the age of 88.

Crump owned some 15 acres at the corner of 14th and Dumas Avenue and that became Sandy's permanent home. His "home" included a small barn for shelter.

Shortly before Crump's death, the partners had a $300 offer to purchase Sandy. As Reed recalled it, "Mr. Crump asked me if I wanted to sell Sandy. I thought a minute or two about, then told him that I didn't want to sell, but would buy his half for $150."

Crump seemingly agreed and Reed reached into his car glove compartment and got a check, wrote it and gave it to "Boss".

Mr. Crump studied the check a minute, Reed recalled, then tore it up

"Ick, I'm going to give you my share of that horse, but don't you ever get rid of him."

Reed didn't. After Mr. Crump's death, his daughter, Mrs. Harold "Kitty" Brady of Amarillo honored her father's request that Sandy be allowed to spend his remaining days in his lot at 14th and Dumas Ave.

The land where Sandy lived was a choice piece of commercial property. The pasture was on the corner of 14th and Dumas Avenue. Businesses were growing up around Sandy, but his home remained untouched.

Shortly after Sandy's death, the property was sold and a shopping center was developed. The center was named after the Crumps -- using the first name, Guy, of Mrs. Crump and the middle name, Lane, of "Boss".

GuyLane Plaza is an "L" shaped complex with multiple businesses and three restaurants along the road -- Thai Siam, Subway, and McDonald's. The most recent addition is a United Convenience Store. The golden palomino that stands by the McDonald's is a tribute to Sandy who lived on that corner so long.

Sandy's saddle and harness is on display at Window on the Plains Museum.

Sandy's Companion
Sandy was never lonely. He was an attraction to children who loved to lean on the fence and watch the palomino.

In the winter of 1973-1974, his most faithful companion showed up. "Just on the bum," according to Reed. The companion, a black half German police - Australian cow dog became his constant companion, living in the old barn.

In an interview in June of 1974, Reed said, "That dog loves that old horse and wouldn't leave now for anything."

Following the death of the horse, Mrs. Reed took the dog to spend its remaining days with her.

​Compiled from: Articles in the archives at Window on the Plains Museum