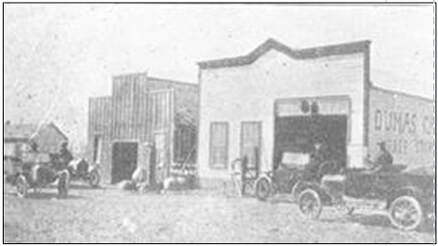 The Anderson Blacksmith Shop on display at Window on the Plains Museum tells only a brief part in the history of two families who joined to become one of Moore County's pioneer families.

One part of the story begins near Koagsberg, Norway on October 1, 1856, when A. L. Anderson was born. As a young man at age 16, he was a sailor on freighting and fishing ships in Norway. His ship docked in Galveston, Texas, in 1881, and he left the ship and his sailing career.

Soon after, he met Elnara Christoferson and they were married in 1883. They began their marriage in Bosque County and lived in a dugout and log cabin. They were parents to four children, Nora, Connie, Fred and Frank.

They moved by freight wagon to Moore County in 1902. Soon after the move, Mrs. Anderson died. A. L. farmed northwest of Dumas and drilled water wells. He opened his first blacksmith shop in 1910.

The ship was a red, wood and sheet iron building located at the corner of S. Bliss and Sixth Streets, near Phillips and Son, Bob Powell and First State Bank buildings.

The second part of the story began in Illinois, where Lena Gray, the oldest and only daughter of Mr. and Mrs. Aaron Gray, was born September 2, 1890. Her mother was not in good health and as early as age 11, she was learning to care for her brothers, her parents and crews working in the fields.

Mr. Gray's health began to fail and when Lena was in her teens, the family decided to move from Illinois to Arizona. When they reached Stratford, Texas, Mr. Gray became seriously ill and died. The family went no further, but, instead, settled on some land near Stratford to farm and ranch.

The well for the family home was located down a small hill and Lena carried water from that well to their home. One day while at the well, a tall lanky cowboy in full western attire rode up on a horse. Frank Anderson worked at a neighboring farm and came to water his horse.

Two years later, the couple was married. Soon after that, the Gray family decided to return to Illinois and Frank and Lena went with them. They stayed in Illinois for the next few years and both of their children were born there, but Frank decided his place was back in Texas and they returned to settle east of Etter.

The children attended school in a small 9' x 12' school building called Prairieview. The school building was also used for Sunday school and church. In spring, the kids rode horses to the school about ten miles from their home.. In winter, they drove a buggy with a canvas cover to keep out with wind, rain and snow and heated rocks to keep warm. 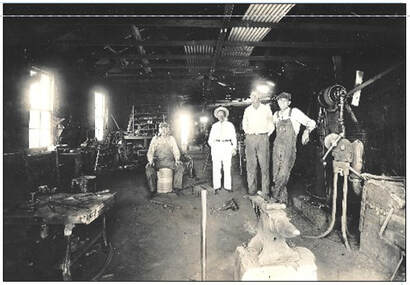 According to an interview with Lena, "Living on the farm was different then. It was nothing to cook for 10 or 15 men, tend a large garden, raise chickens, milk cows. We sold milk, eggs and butter in Dumas, and our turkeys were marketed in Dalhart.."

She remembers the drought years when dust storms were blackening the prairie regularly and said, " If I hadn't been married to Frank, I would have left."

The farmers worked long hard hours with horse drawn plows and wagons to haul supplies and gardened with a hoe to make a living. In winter, Frank and the neighbors freighted coal, cow cake and supplies on sleds drawn by horses through the snow from Channing and nearest railroad.

In 1927, Frank began helping his father, A. L., in the blacksmith shop. A. L.'s health forced him to retire and in 1934, the tall bearded man who came from Norway to help settle Moore County died.

The blacksmith shop eventually became a sideline as machinery became motorized and hand tools were replaced with power tools. The forge, anvil and trip hammer remained in the shop and parts of the Anderson equipment are now in the museum.

In recollections from the son Roy, "The shop served many purposes in Dumas. Before a movie theatre was here, one side was leased for open air movies (the building had no roof). If it rained, you left or if the movie was not interesting, you could always look up and enjoy the stars. One night the film caught fire, scattered people and blazed away at the building. After two more fires, Dad built a new building and opened the shop on south Twichell Street." After Frank's retirement from blacksmithing in 1956, he went back to farming.

Compiled from: Moore Sunrises. . . Sunsets
The Windswept Land
​Articles in the Archives at Window on the Plains Museum
More Bits of History