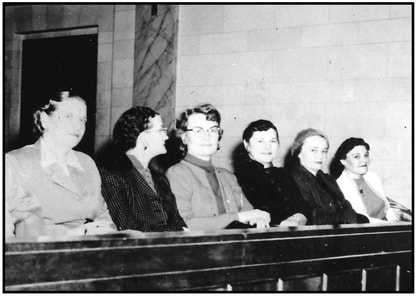 Members of the first all-women jury were, from left to right, Nelle Jones, Cloie Phillips, Louise Tindle, Mary White, Margaret Poole and Juanita Morrison
Until 1954, women in Moore County were not called for jury duty but in other parts of the United States and territories, women were allowed to serve much earlier.

As early as 1870, Chief Justice of the Wyoming territory, John H. Howe, had assumed serving on juries were part of allowing them to vote. In 1871, Howe was replaced and his successor no longer allowed women to serve. The state of Wyoming allowed women on juries in 1949.

The first state to grant women the right to serve on juries was Utah in 1898. Eleven other states followed between 1898 and 1920.

In 1920, the Nineteenth Amendment was passed which granted women's suffrage and the push for rights to serve on juries was increased.

On June 15, 1968, a small story in the New York Times read "A law making women eligible to serve on state juries was signed today by Gov. John Bell Williams. Mississippi was the last state in the nation to take the step."

Texas did not allow women on juries until late in 1954 when an amendment to the constitution lifted all limitations on women in the jury system. Moore County made history in February of 1955 when the first all-woman jury occupied the jury box. The case was heard by County Judge Ezelle Fox. The panel of six heard testimony in a mental case and its members returned with a quick verdict of sending the woman in question to an institution for treatment.

The six women on the jury were:
Members of a jury panel were selected by a jury commission appointed by the county judge. The commission selected names of prospective jurors, a sort of prescreening process. The first woman to serve on a jury commission was Mrs. Gladys Carroll who served in 1955 with two men.
Compiled from:
Moore County News Press story, August 20, 1977
Moore County News story, February 10, 1955
Women in United States Juries, Wikipedia
More Bits of History