A Dumas artist who came to Moore County as an infant, left a legacy for Moore County that tells stories about an earlier time in history.

Gladys Makeig and her parents came to Moore County on an immigrant train from McClennan County. The year was 1904 and Gladys was an infant.

Her parents Fred and Ella, came to farm some land Ella's father, Amos Alonzo Lovvorn, had filed on in 1903.

Gladys was the oldest of four children. She attended Dumas schools through tenth grade, then graduated from Amarillo High School. She attended Clarendon Junior College for one year, then started teaching at one of the small Dumas schools. The rest of her education was completed in summer when she attended West Texas State Teachers College in Canyon, Clarendon Junior College, the University of Colorado in Boulder and East Texas State Teachers College in Commerce.

In September of 1925, Raymond 'Roy' Carroll, who called himself a Tennessee hill-billy, came to teach commercial subjects in Dumas High School. At the end of the school year, he and Gladys were married. The ceremony was in the home of Gladys' uncle, C. S. Makeig, in Amarillo.

The couple continued teaching and attending college in the summers to compete their degrees.

Roy's father and grandfather had been farmers in Tennessee and he was anxious to start farming in Moore County. It was difficult to get started in the depression years, so he continued to teach until 1930. In 1931, he began teaching in the New Braunfels High School and taught there seventeen years. He continued farming in the summers.

Gladys retired from teaching after eleven years in Dumas, the last six years as English teacher at the high school.

Gladys had been interested in art all her life, so she began to spend her time drawing and painting. She used mostly pencil sketching, oil and watercolor. Her favorite subjects were historical buildings and doin portraits in oil or watercolor.

Her pencil drawings recorded the historical buildings, such as the original courthouse, Phillips and Son, and other businesses. She drew many of the early homes in the county.

Gladys and Roy were married fifty-seven years and five months when he died in October 13, 1983.

With the help of an adopted son, Tom Hokanson, Gladys continued to take care of their farming interests and continued with her artwork. She became one of Moore County's well known artists and received many awards for her work.

The drawings that follow are from Gladys' collection of historical buildings. The captions are the way she wrote them.
Click on the drawings to learn more about each one. 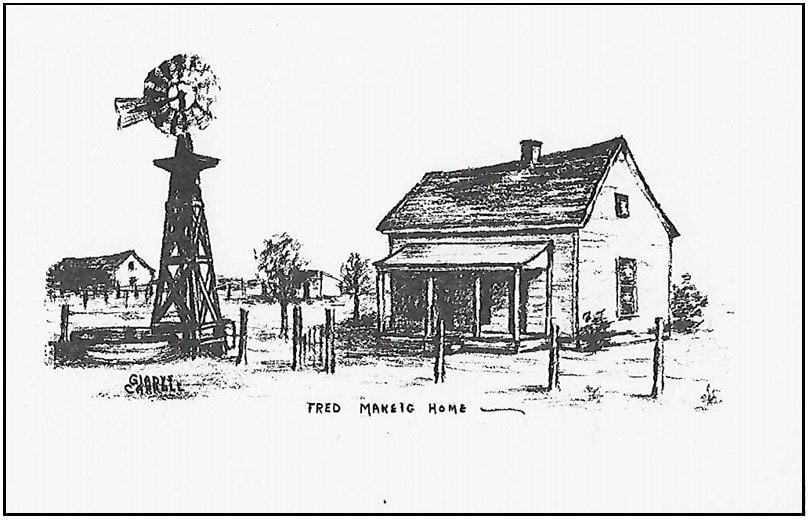 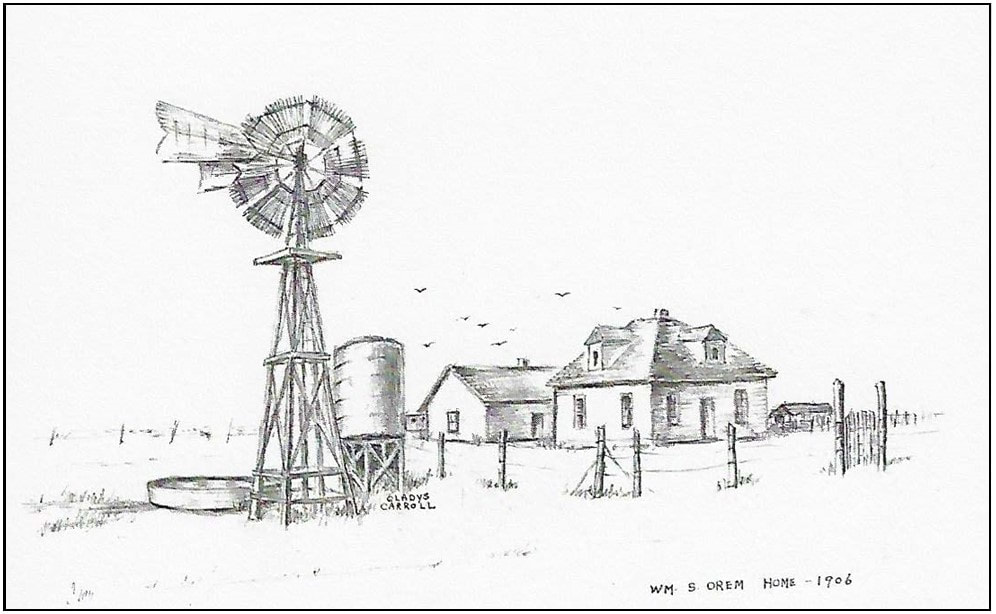 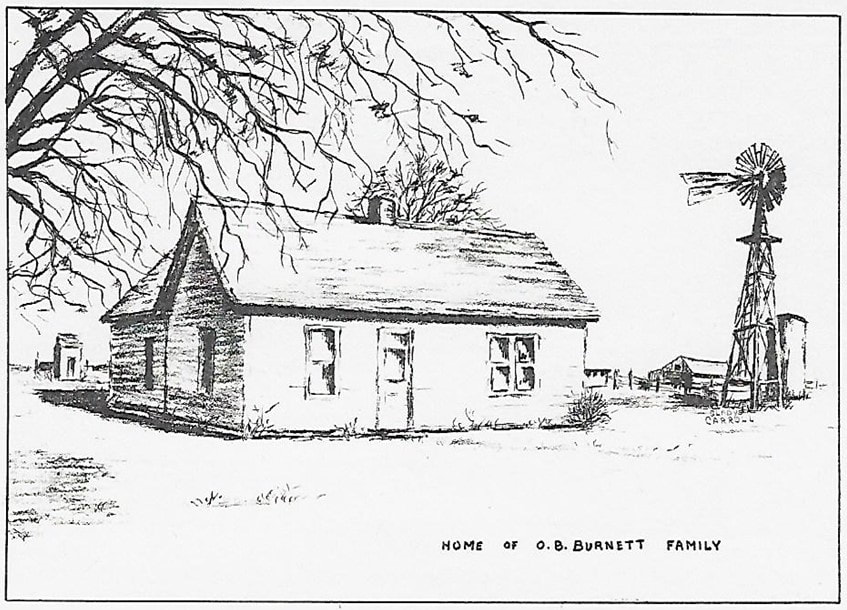 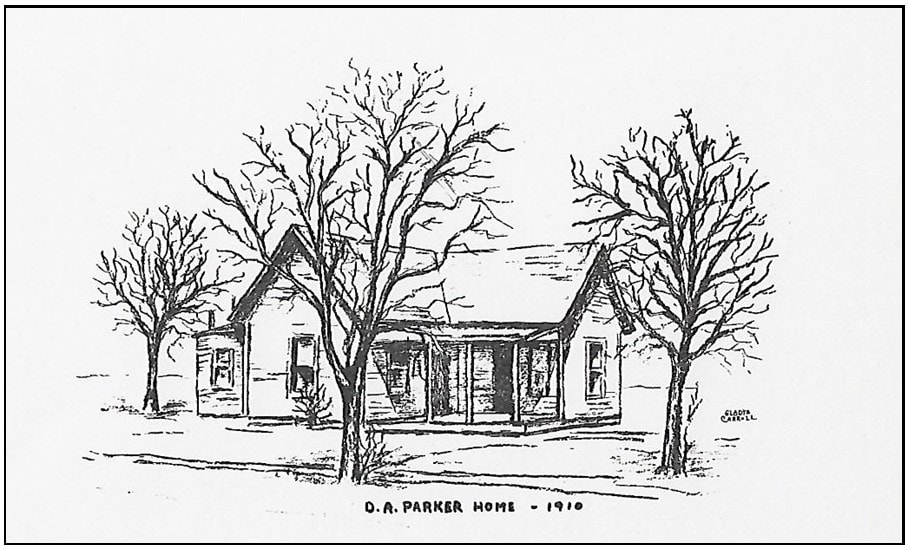 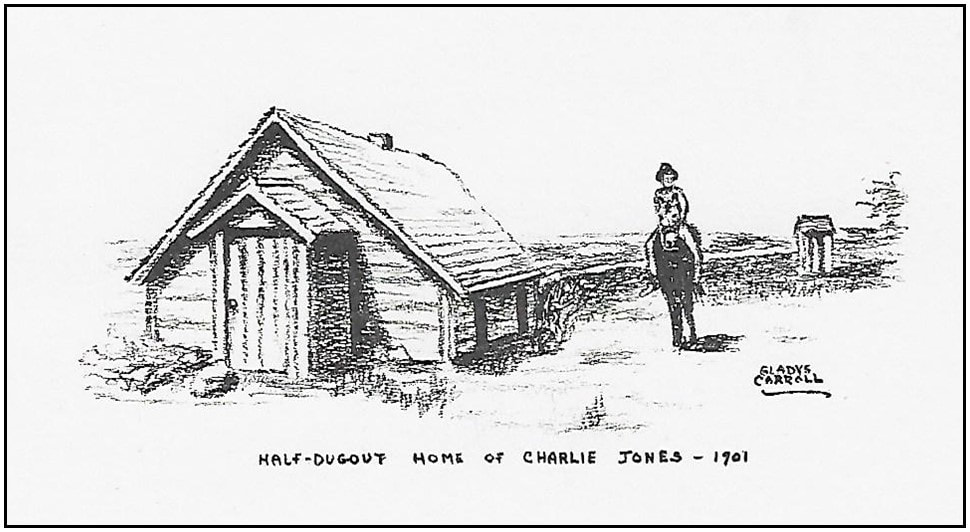 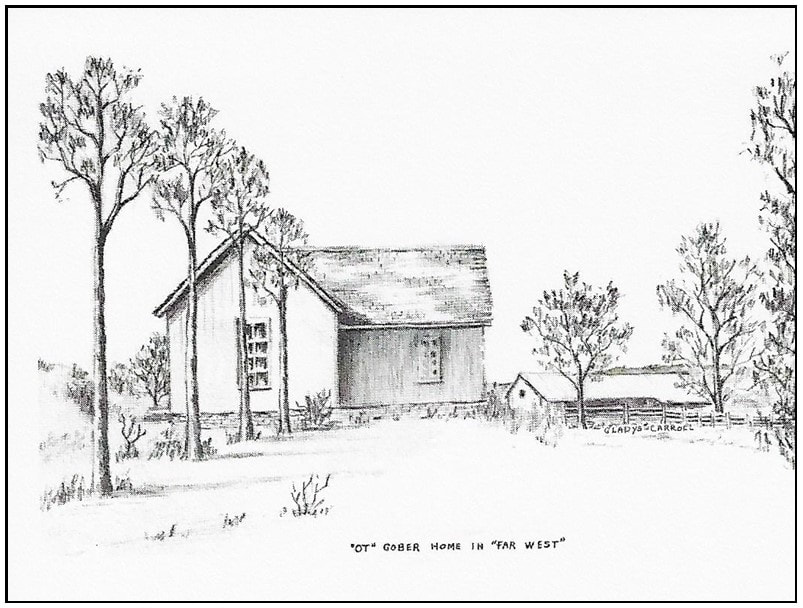 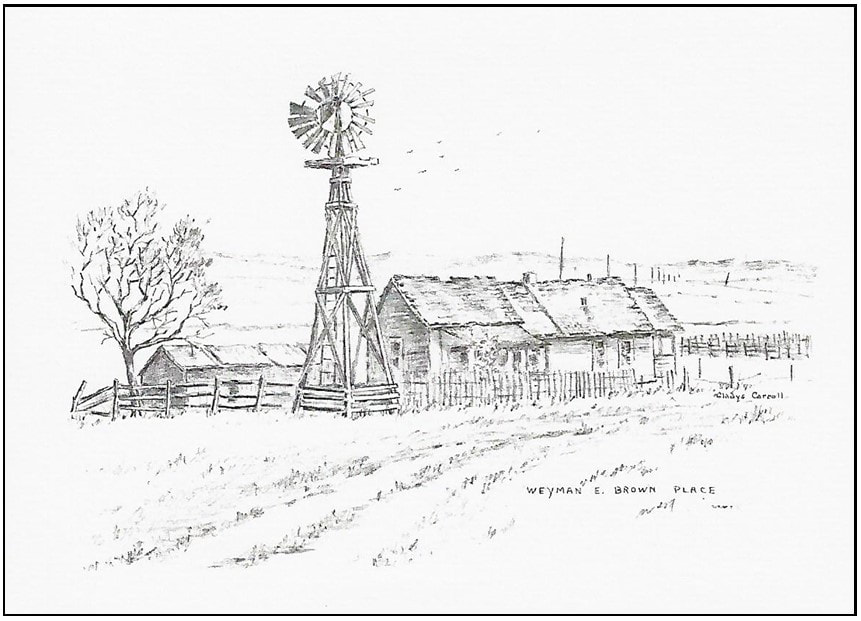 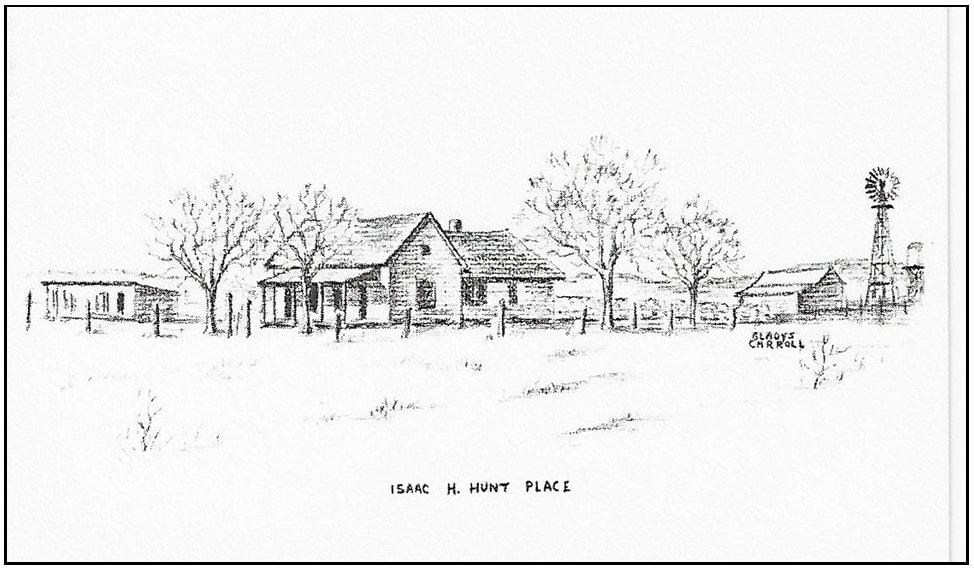 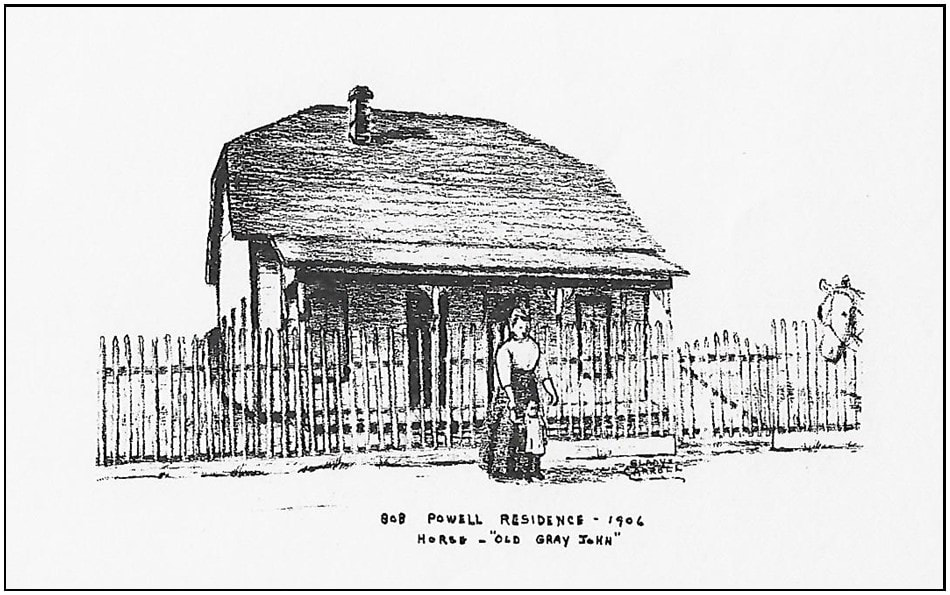 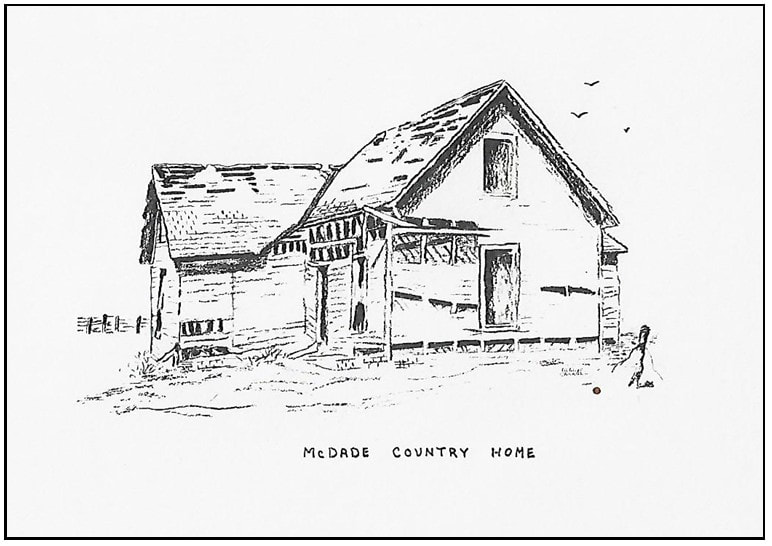 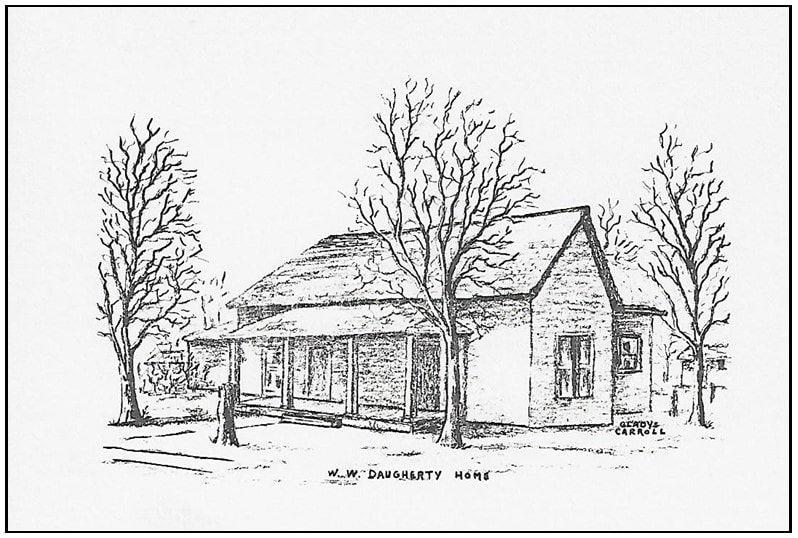 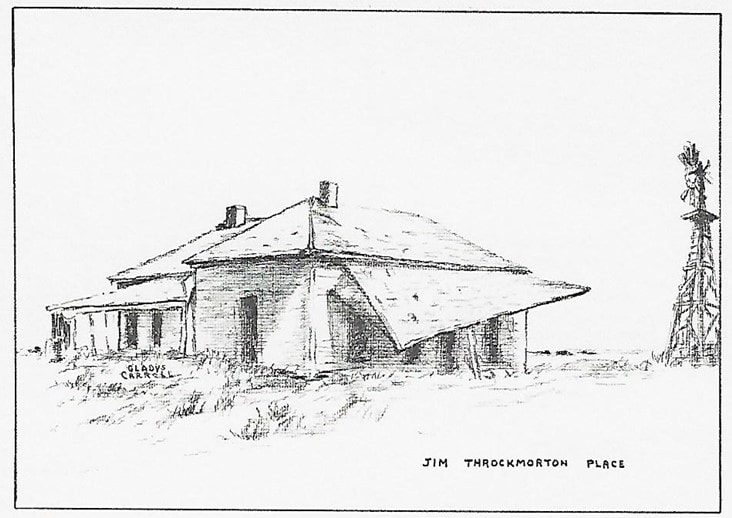 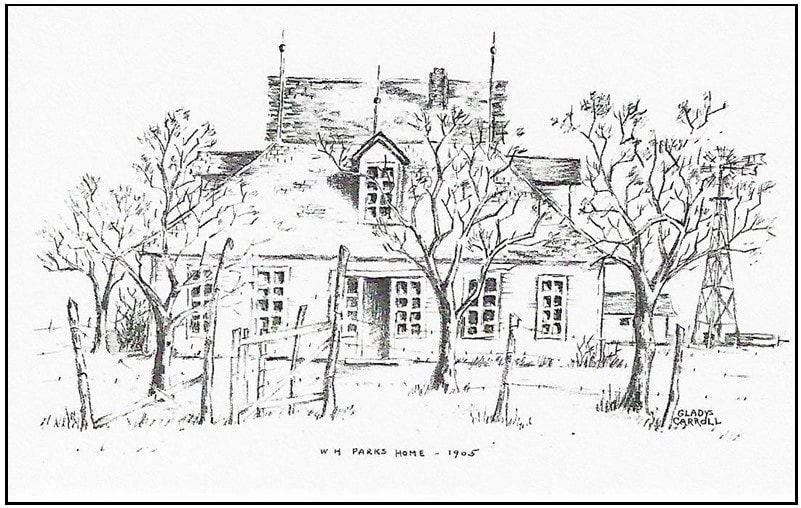 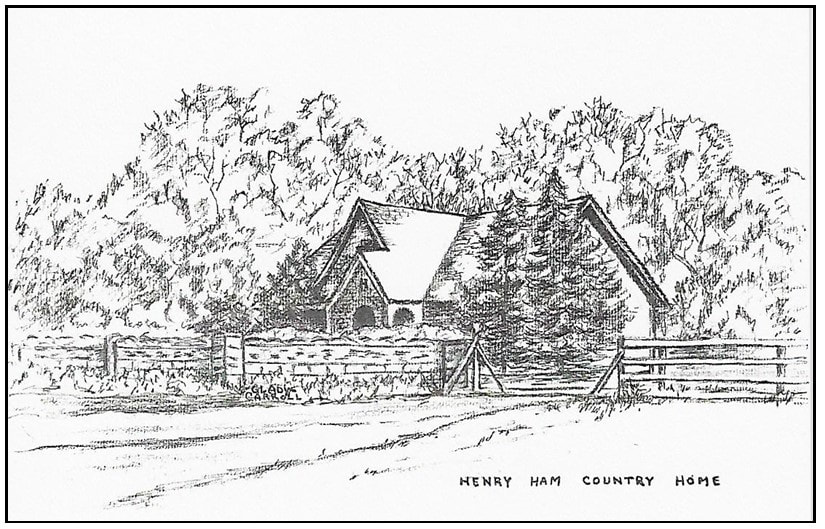 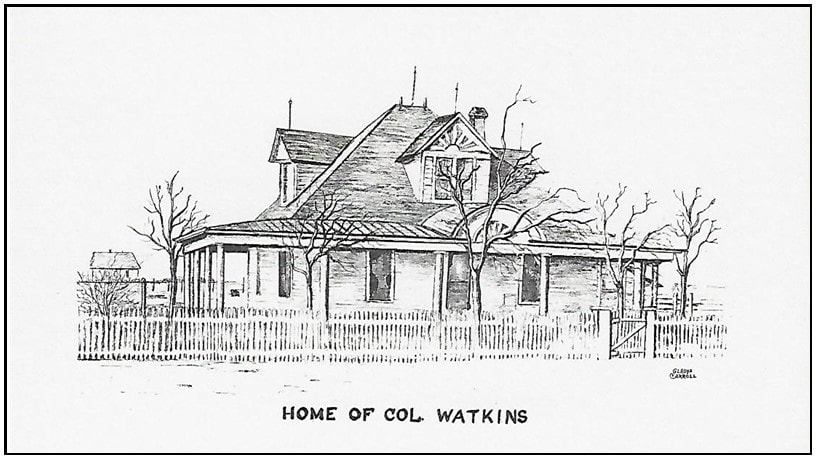 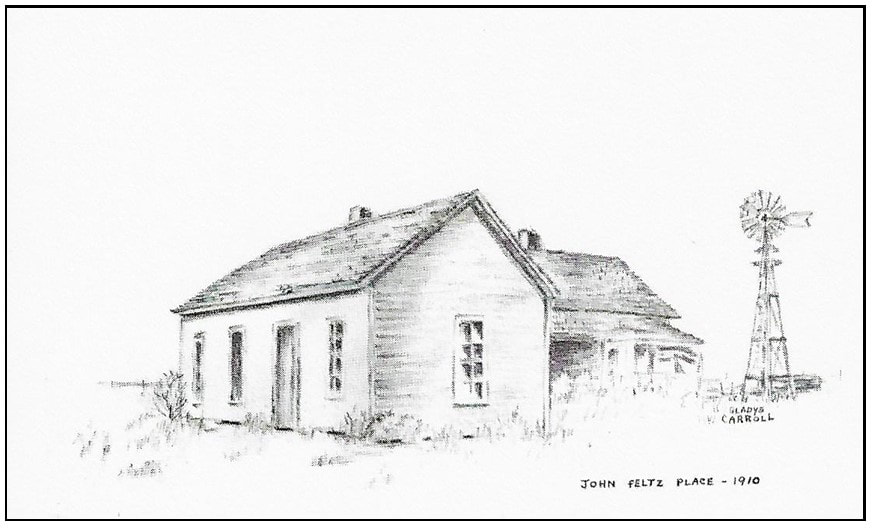 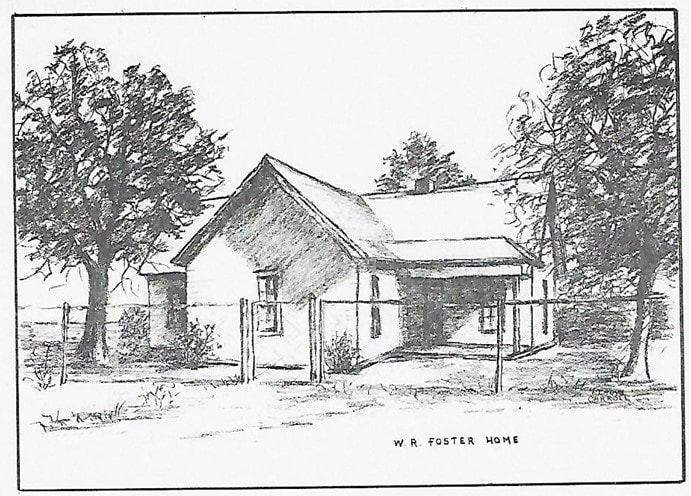 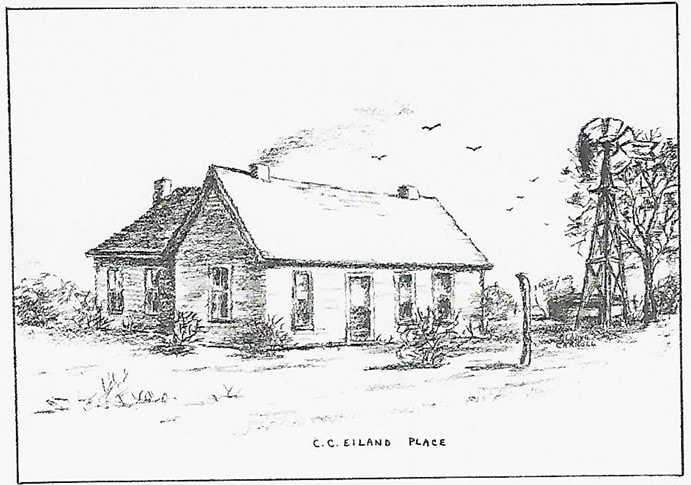 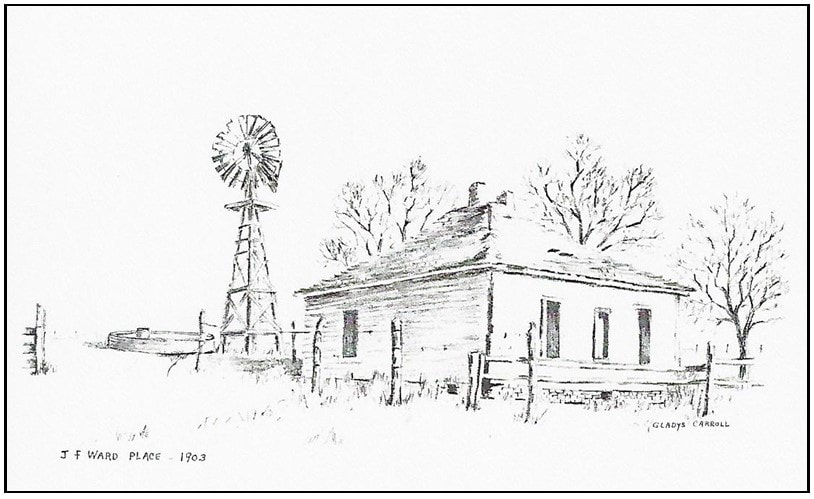 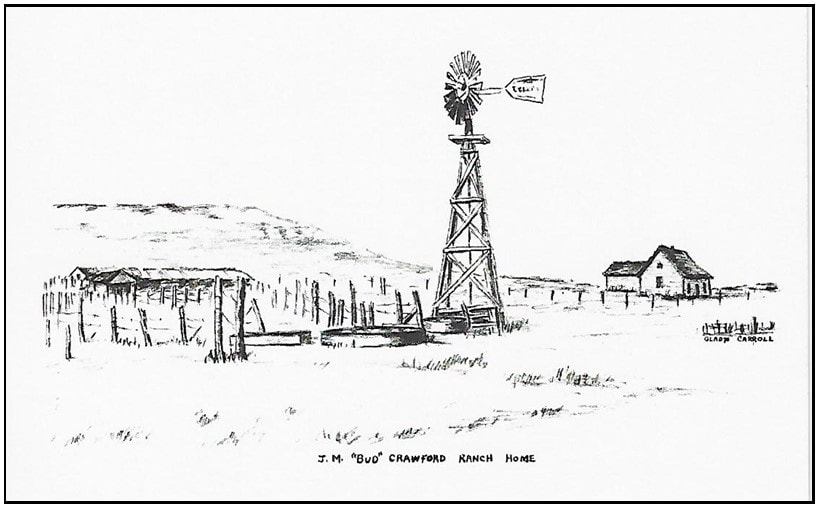 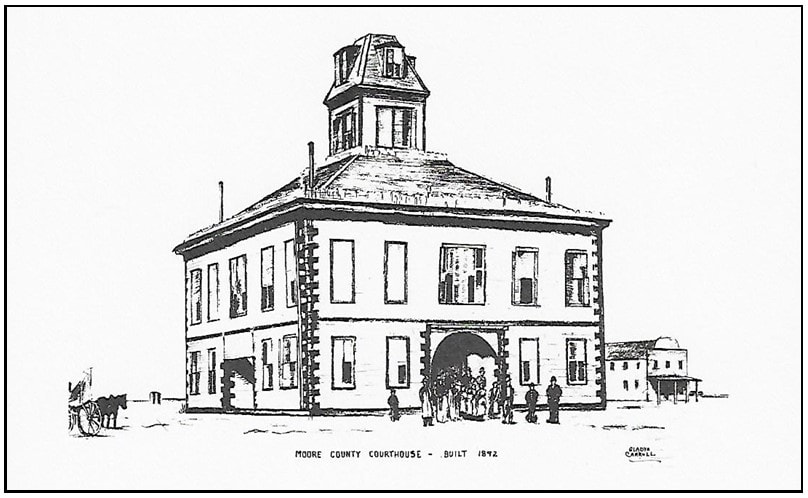 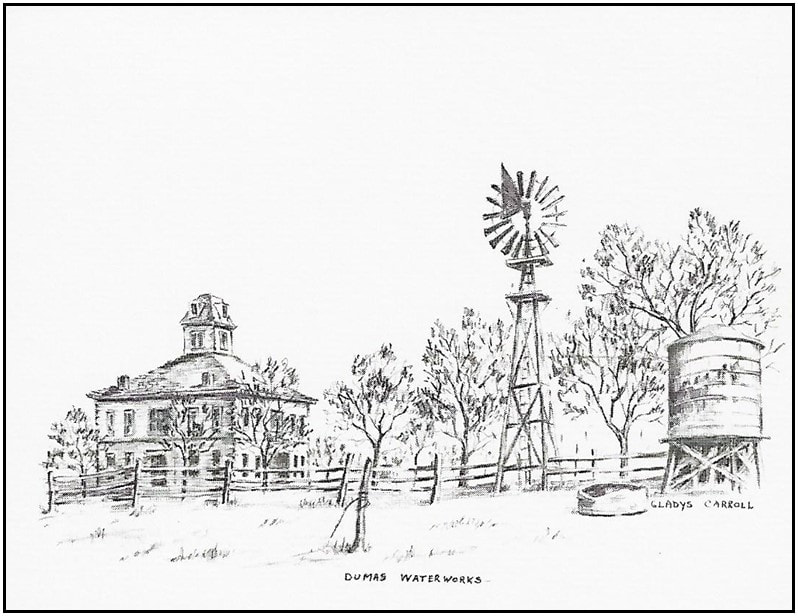 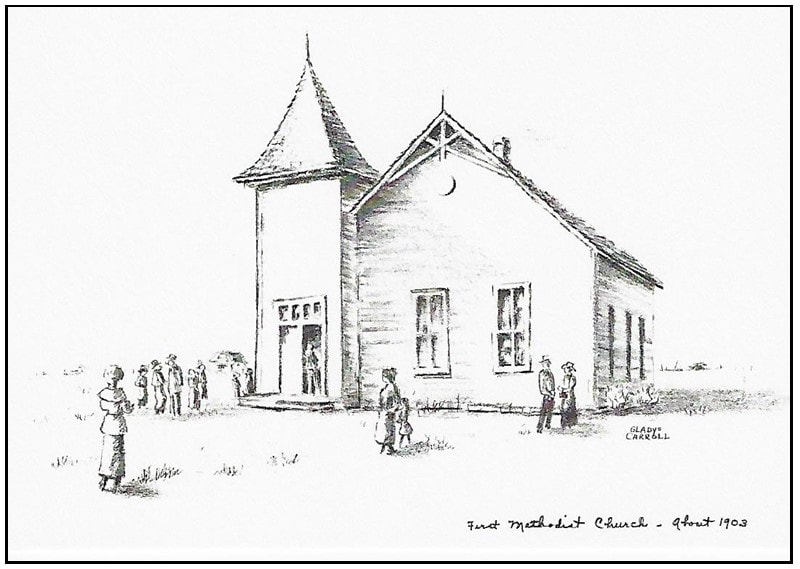 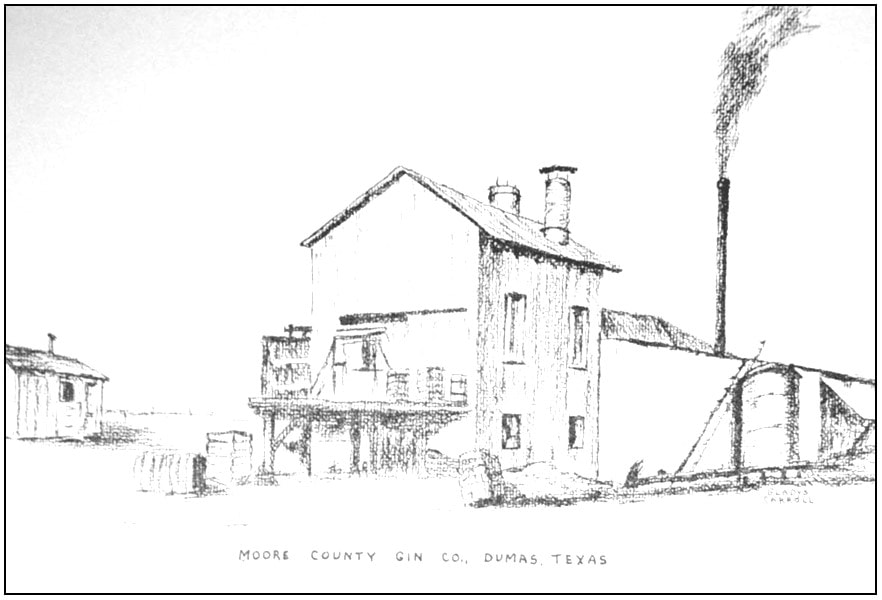 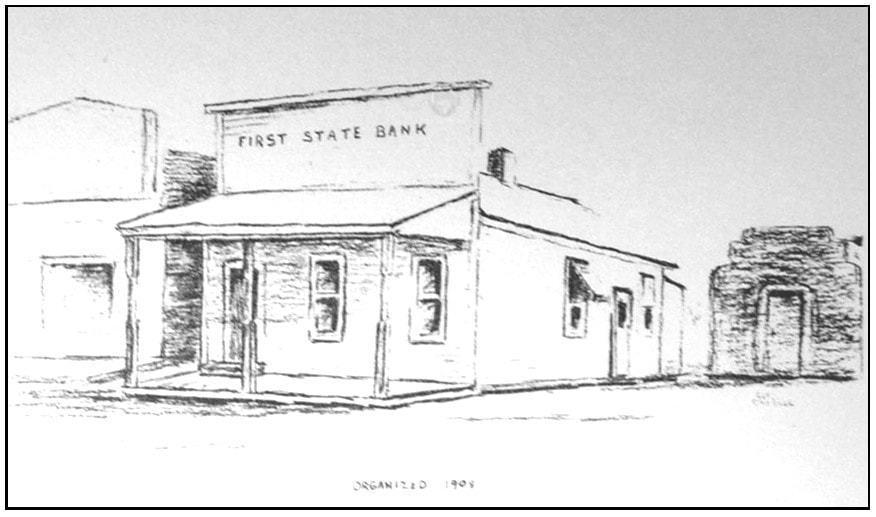 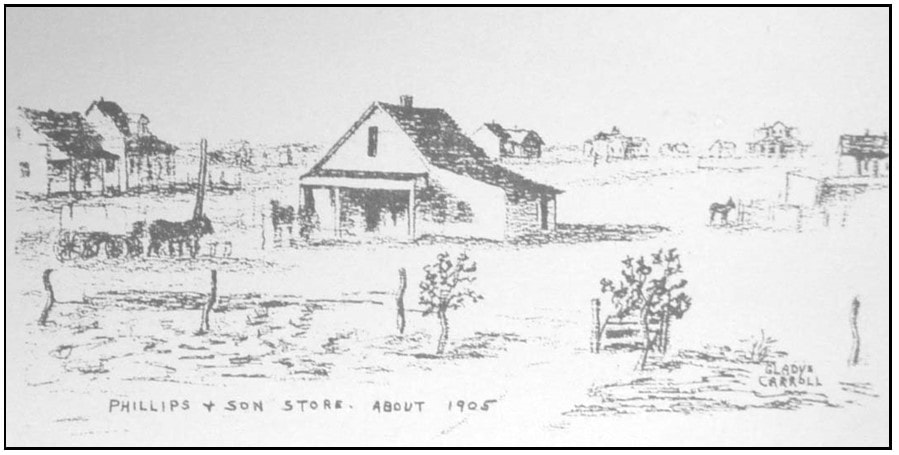 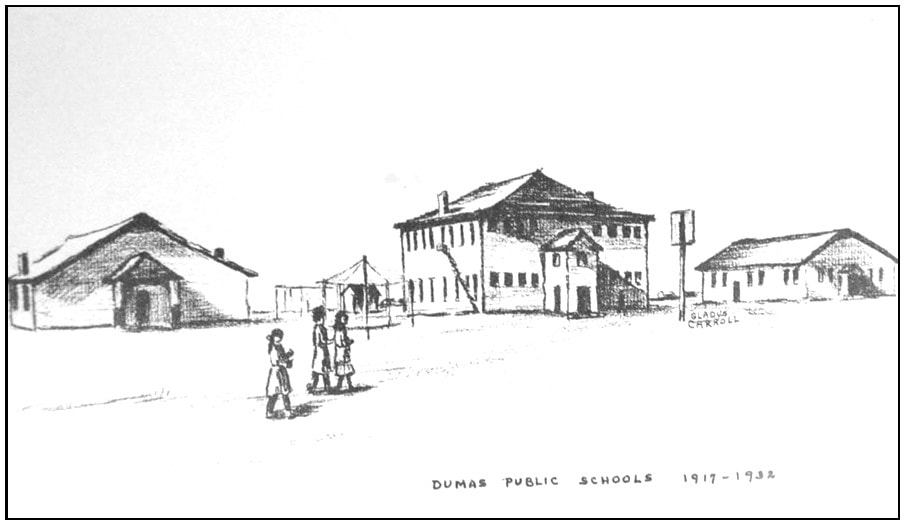