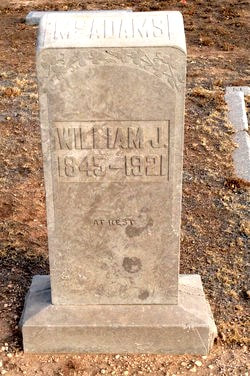 Veteran's Day is observed across the United States. We recognize those who have served in all the branches of the military. One group of soldiers, those who fought in the Civil War, should also be recognized.

Texas was considered a Confederate State during the Civil War, but not many soldiers were actually from Texas.

After the war, many soldiers returned to their homes in the south to find there was not much left. They chose to start a new life away from the war torn South.

At least three graves in the Dumas Cemetery are for soldiers that fought for the Confederacy -- Dr. Samuel W. Anthony, William J. McAdams and Joseph Layette McDade.

William Joseph McAdams was sixteen years old when he volunteered for the Confederacy. He replaced his father who was very ill and had lost an arm. He was assigned to the Confederate Cavalry on March 29, 1862. He served with Company D of the 4th Regiment of the Tennessee Cavalry.

According to family records, he was shot once through the hip and always had a limp from the injury.

He told of being taken prisoner by Union soldiers. The soldiers were taking him back to Union lines and found a long tobacco storage shed to stay for the night. The soldiers found a large keg of corn liquor hidden in the shed. They all got drunk. After they all passed out, McAdams picked up his saddle and escaped.

W. J., his brothers and one sister decided to come to Texas, settling in Hunt County near Greenville. In 1898, they came to Moore County and filed on some land northeast of Dumas, living in a dugout for the first few months.

He operated the first hotel in Dumas and a wagon yard. He was in a partnership with another Moore County pioneer, Arthur Nield, in a mercantile business.

On February 15, 1921, McAdams became the first of the Confederate veterans to die in Moore County.

Dr. Samuel W. Anthony was already a practicing doctor when the war started. He entered the war early and served as an army surgeon. He was part of Capt. Alva T. Bennett's company of Johnson's Regiment, Georgia Infantry, enlisting on May 13, 1862, in Jackson County, Georgia, at age 30.

He was captured six months later, but was released November 18, 1862 in an exchange of prisoners aboard a ship. He also participated in the battle of Gettysburg.

Anthony and his family moved from Rome, GA, to Wichita County, Texas, and from there to Moore County. Dr. Anthony was 78 years old when he came to Moore County in 1908. He registered as a doctor in the county clerk's office on March 20. Bob Powell was county clerk.

Joseph Layette McDade enlisted in the Confederate Army in 1864 at age 18. He served with Company B of the 28th Louisiana Regiment. Following the end of the war, he moved from Louisiana to Fannin County. He married Jane Elizabeth Jennins in 1875. They lived in south Texas for 31 years.

They came to the Panhandle in 1905 on an immigrant railroad car loaded with their livestock and household belongings. The train stopped in Channing. They came to Moore County with their three children and belongings in a wagon.

When McDade died in 1944, he received a military funeral and county offices and businesses were closed in respect. He was the last surviving Confederate soldier in the Panhandle.