Blanton: A Personal Story about my Great-Grandfather
By Glynda Pflug 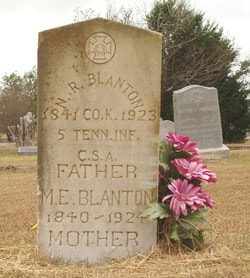 Nathan Ransome Blanton lived in Tennessee near Murfreesboro. After the war, he wrote the following story about his time as a Confederate soldier.

"I was born in middle Tennessee near Murfreesboro, on the 11th of August, 1841. I stayed there until I was 19 years old.

In 1861, the Civil War began, and there was a call for volunteers by the Confederates. I joined the 5th Tennessee Infantry Company A. The captain was John A. Lotetal of Union City, TN. We first went to Columbus, KY, on the Mississippi River, and prepared for a battle at Belmont, in Missouri just across the river. Then we left there and went to New Madrid, MO, down the Mississippi River, and prepared for a battle, which was fought 12 days and nights. At the end of this time during which we suffered from hunger and loss of sleep, we retreated and were ordered across the river to Corinth. There we met the Federals and fought a two days' battle, on Sunday and Monday. Then, we fell back to where we began and raised a white flag. The Federals also raised a white flag. Both sides met and agreed to help bury the dead, which we did by digging ditches and dragging the dead bodies to the ditches, throwing them in and cover them the best we could.

After that we returned to Corinth, MS. There, we had a big battle under the command  of General Price. Then we retreated to Tupelo, MS, where we fought another battle, in which we were defeated again, and were ordered from there to Chicamugua. Then we had another battle, won a victory over the Federals and sent them back to Chattanooga. The Confederates then divided their army, a part of them being placed on Lookout Mountain and part on Missionary Ridge. Then the Federals surrounded the Southern Army and nine thousand of us were taken prisoners.

We were taken to Rock Island, IL, and put in prison, where we stayed two years."

Note: The Rock Island facility was built in 1863 and not completely finished when the first prisoners arrived. The first prisoners were 468 Confederates captured in battles in Chattanooga, TN. Blanton was one of these prisoners. More than 5,000 were added that same month. They lived in 84 barracks, each holding around 100 prisoners. During its two years of operation, the prison camp housed a total of more than 12,400 Confederates. A total of 1,964 prisoners are buried in the adjacent military cemetery. Most died from disease, since sanitation was primitive as in all army encampments and exposure to heat and humidity during the summers and freezing temperatures during winters. In 1864, deadly smallpox epidemics raged through the prison.

Blanton tells of prison life, "The first year we fared tolerably well and had guards around us day and night, but the last twelve months we were in prison we were guarded by negroes. They didn't have to feed us. We had to eat dogs and rats. I didn't eat the dogs, but I have eaten many rats. Every night at 9 o'clock they blew a bugle for the lights to be put out, and if they were not out by the time the bugle quit blowing, a negro shot them out.

On the 5th day of March, 1865, the chief commander of the Federals came in and read the peace declaration. Then, they took us out, five hundred at a time and took us from Rock Island to Baltimore, MD. Then we got on a ship going to New York, and then we went to Washington City and from there we went to Richmond, VA. There the Federals turned us over to old General Cheatam, who marched us out in the street and told us we were free to go home.

So we left Virginia without clothes or money and were fifteen hundred miles from home. First, we went to Oakland, SC, where we drew enough rations from the government to last us three hundred miles. We saw where Sherman had gone through the country and forced women and children from their homes and burned every house in the distance of 300 miles. Nothing could be seen of the houses but the chimneys as far as I could see. We walked and carried our provisions three hundred miles and didn't meet a person. When we lay down to rest a night, our pillows was rock or a chunch of wood, and the wolves would make music for us all night. Our food gave out two days before we reached Atlanta and we broke off hazelnut buds and ate them to satisfy our hunger.

Finally, we reached Atlanta and went to a hotel. The hotel man treated us kindly, gave us our meals, a good bed and filled our grub sacks. Then we rode twelve miles on a boat, the only ride we got. They put us off in the woods, where the wolves were so thick it looked like a narrow escape at the best. We went to a house fifteen miles from our boat landing. The only occupants of this house were a woman and two girls, who were very good to us. We left there for Jackson, MS. Upon reaching Jackson we were very hungry and begged for something to eat, but nobody would give us a bite. Some would curse us and turn us away. So, we left there and went to Hollysprings, MS, where we were successful in getting something to eat. I say "we" for I had a companion.

After a lapse of five months and twenty days we arrived at Milard, Gibson County, TN. Here I found my father, whom I had not seen in four years, and who since my departure, had located some fifty miles from the place where I was reared. He asked us to come in. I replied that we were not fit to come in and asked that he go and get us some clothes, which he did. Then my partner and I took a pair of scissors, a razor and a comb, went to the barn and treated each other to the first haircut and shave we had had in four years. Now imagine how we looked. Nevertheless, we came out of the barn looking as well as feeling like white men.

Now, my friends, this is a true experience of my life and the hardships of my life in the war, all of which I pulled through with only the loss of one finger."
--N. R. Blanton

Blanton came to South Texas and lived near Granger.  He was living in Panhandle at the time of his death on January 26, 1923, at the age of 81.