Going any direction from Dumas, the horizon used to be dotted with windmills, quietly turning in the wind, doing their job, pumping water. Today, it is noticeable that the horizon is changing. The windmills are no longer needed and quickly disappearing.

In the past, the landscape was dotted with the mills, some were operational, but some were derelict or unused. Now, the windmills are leaving -- a part of history, replaced with pumps energized by solar panels.

The windmill was crucial to settling the west. Most of the frontier had no reliable natural water source. The windmills brought much needed water for cattle, crops and the locomotives that helped settled the west.

Windmills were first introduced in the United States in 1854 in New England when machinist Daniel Halladay obtained the first patent for a self-regulating windmill -- a windmill where the blades would automatically fold up in high winds to avoid damage.

By 1920, more than 700 U.S. companies were manufacturing varieties of windmills. 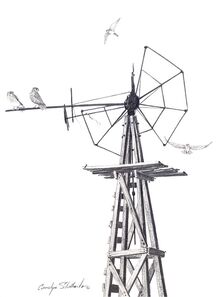 "Eclipse"
The Wheeler "Eclipse" was considered the "granddaddy" of the windmills in the Southwest. Few have survived and the remaining are in museums or private collections. The "Eclipse" was patented in 1967 and by 1973 approximately 2000 were sold.
​
The largest operational windmill in the nation was a 22½' wooden wheel  "Eclipse" on the Canon Ranch in Pecos County, erected in 1906.

Windmills started appearing in the Texas Panhandle in 1860's and were used mainly for ranchers to water cattle. The windmills made homesteading possible and could be seen scattered across ranches and at every farmhouse.

A competition between two windmills were Aermotor, Monitor, Dempster, Axtell, Star and Samson. Sears sold David Bradley windmills. On almost every rural road an Aermotor could been seen. Approximately 50% of windmills in the United States were Aermotors.

With the addition of windmills, a new profession was born. "Windmiller", also called "greasers" were required to maintain and repair the hundreds that pumped water across the Panhandle. 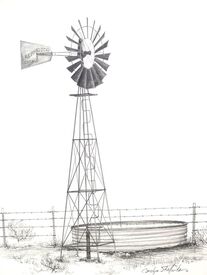 Aermotor
Louis Trumble was the Panhandle's first "greaser". Another area "Windmiller" was Charlie Jameson who drilled, installed and serviced windmills for 49 years.

Following his death in 1967, his nephew, Rupert Jameson, continued the business. The Aermotor windmill that stands south of the museum was a gift of the Charlie Jameson family.

The water supply for Dumas began with two wells, each pumped with windmills. The wells were drilled in 1893. County records show that $85 was spent for two towers (one on the courthouse square and one 6-miles west), and $114 for two 14' windmills (one was upgraded to a larger size for the tower west of town at a cost of an additional $61). Cost for drilling the wells was $425. Both had good water and served Dumas until about 1930. The original windmill was removed from the courthouse square in 1938 amid controversy from county historians

At one time, Moore County averaged a windmill for each of its 900 sections. Today the windmills, once known as "beacons of the plains" are fading into history.