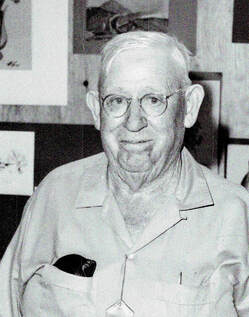 Charlie Jameson
In times past, windmills dotted the plains, but today they have been replaced with solar panels that pump water.

The museum has tried to preserve the history of area windmills. One, an Aeromotor, has become the symbol of the museum and stands on the southside of our building. The windmill was a gift of the Charlie Jameson family and was erected by Dumas Water Well Service in 2002 when the museum moved to its new location.

Charlie was one of the first pioneers in our area. He was nine years old when he came with his family in 18998 and settled about 15 miles from the Alibates quarry. In 1901, they moved to Moore County about five miles southwest of Dumas.

He described Dumas as having "an old square courthourse which dotted the area where the majestic County Courthouse is situated today, and on the northwest corner of the block stood an old out-building like a sentinel. West of the courthouse was an old square frame school house of about the same vintage."

"On the other corner was an out-moded hotel (with all the front windows the victim of stray sling-shot pellets) stood on the other corner and in the rear of the building was a very modest room (with windows) containing the U.S. Post Office and a small grocery store."

When Jameson first saw Dumas, he recalled seeing "The little mounds of dirt that marked the 'dug-out' homes of earlier settlers."

Through his earlier teens, he worked for wages for some of the farmers who had settled in the area, mostly large ranches. Even as early as 1906, he saw the need for water wells in the Plains area. He drilled his first water well on the Coon Ranch about six miles south of Dumas.

Deciding "a man must better himself if he is to get ahead," Jameson went to the Canadian Academy for a year. He rode a horse to Canadian taking only $7 of his hard-earned wages with him, sold his horse and saddle on his arrival in Canadian and got $135 from the sale.

From Canadian, he attended Wayland Academy a year. To get his education at the two schools, he "carried many a hod full of coal, was janitor for churches and swept many floors to meet expenses." He had a gasoline stove and two irons weighing 24 pounds apiece. He pressed his own clothes and got four bits for pressing others. One of the biggest jobs was janitor of the First Baptist Church in Canadian.

Before leaving Dumas for school, he had worked as a freighter for Phillips & Son, hauling freight between Hartley and Dumas a couple of times a week. He had only been at Wayland for a year and he was offered a job again to work for Phillips & Son working three days at each store. "The only difficulties ever encountered during those freighter years was bad weather being caught in blizzards of terrible down-pours of rains. Nothing exciting like being chased by the Indians," he remembered.

​About 1913, Jameson said he became "madly infested with digging water wells, but not for irrigation purposes. In those days, we didn't know the extent of the underground water supply." He established the water well drilling business in 1916. Throughout the years, he drilled many wells the average depth from 350 to 450 feet. The wells were pretty far apart -- 50 miles away. When he dug 30 feet a day, he thought he had done a big job. The rig was moved by horses and then the horses were hooked to the drilling rig -- that was the horse power. The horses would go round and round to drill the well. According to Jameson, "he had walked as far as from here to New York and back walking that team."

He went out of the drilling business in 1956, retiring and turning the oldest well drilling outfit on the North Plains over to his son, Tom Jameson.