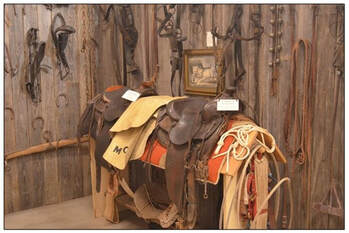 One corner of the Family Life Center at Window on the Plains has a display of tack and branding irons that were used in early Moore County.

Walls of the area are made from barn wood from the W. J. Morton farm, east of Dumas. The barn was over 100 years old when a group of volunteers removed the wood to make the tack room at the museum.

Hanging on the walls are panels of wood with brands from area ranches. The branding iron boards were made in the late 1970's. Each rancher brought a branding iron and burned his brand on the panels.

The two panels show 84 brands that were used in Moore County. Many of the brands are still being used by families of the one who first registered the brand.

A few of the active brands are used by families of Morris Hunt, W. J. Morton, Taylor Brothers, Pat McDowell, Ed Stallwitz, Carl Beauchamp, Edgar Kempson, Rager Jones, and Howard Clark. There are many other brands still being used in the county that possibly were first used by a family ancestor.

Brands have been part of the growth of the museum, both historically and financially. The original branding boards were a fund-raiser. Each brand owner used his iron to brand the board for a fee.

Shortly after the museum moved to our new location at 1820 S. Dumas Ave., brands were again used as a fund-raiser. This time brands surround historical places on woven afghans. Brand owners paid a fee to have their brand on the afghan. The afghans are still available in the museum gift shop.

The branding boards are included in a tack room filled with reins, bridles, saddles, ropes, and other items used in early Moore County.

Several saddles line the wall, some from Don Ray's studio, a lady's side saddle and the saddle that belonged to Don Ray's father, Rondy Ray. Artist Don Ray used the western saddles for examples in his western art.

Tack rooms were important in farms and ranches. They were near the stable and housed reins, saddles, bridles. and other items used for riding horses or pulling wagons.
More Bits of History