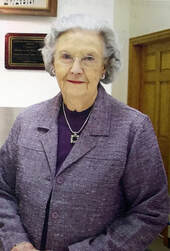 Mary Simms
One of the museum's showcases sparkles with beautiful cut glass, a gift from Mary Wiseman Simms, daughter of Irwin and Catherine Boulware Wiseman.

Irwin Wiseman came to the Panhandle in 1906 when he and his parents lived five miles south of Amarillo. In 1918, he bought a section of land 22 miles south of Stratford. In April of that year, with the help of a brother, he moved to the land with two teams of mules, two wagons and a Model T Ford.

Nothing were there but a windmill, a good well, stock water tank and barbed wire fences.

In one day, they put up small wooden building with a dirt floor. They lived in the one room for two months. Then, a small three-room house was built.

According to Irwin Wiseman, a bachelor stove was used for cooking and heating, kerosene lamps and lanterns for lights. Water was carried to the house at first and later piped.

A carbide plant was installed for lights and cooking.

In 1919, Irwin brought his new wife, Catherine, to the home he had built.

The family went to Dalhart for groceries, shopping and the doctor. They raised good gardens with irrigation, canning, and preserving vegetables.

A son, James Irwin Wiseman, was born in 1930 and continued to farm until his retirement.

Mary married Ben Simms, Jr. and they lived in Fort Worth until Ben's death. They had one son, Mike. After Ben's death, Mary returned to the Panhandle to make her home. 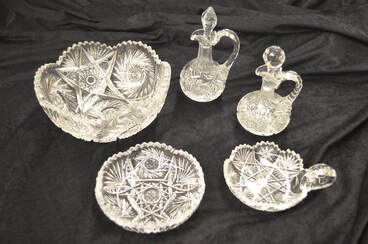 Part of the Simms Cut Glass Collection
She enjoyed pretty things and a cut glass collection that her parents had received as wedding presents in 1919 was one of her favorites. She donated the collection to the museum when she moved to a retirement home in 2007.

Most of the cut glass is the same pattern. A few pieces are different, but they all sparkle for visitors to enjoy.

Window on the Plains is proud to be the home of the Mary Simms Cut Glass Collection.