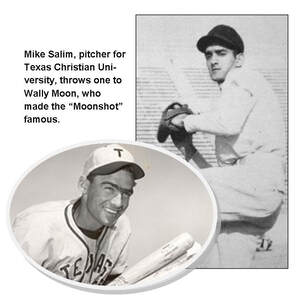 Moon Shot is a word that fits only in baseball. One Dumas resident is more familiar with the word than most. He was part of the original "Moonshot".

Mike Salim, a pitcher for TCU, was pitching a game against Texas A&M in the old Kyle Baseball Field with Wally Moon came to bat.

Moon hit the ball over the wall and onto the track surrounding Kyle Football Field. He described the hit later in a radio interview, "I hit one from the baseball field onto the Kyle Field track in 1949. Coach Anderson, the track coach, retrieved it for me. I still have that baseball. It was a monstrous homerun, and lots of people still talk about it. It was high, and I would classify that as my first Moonshot." That homerun was estimated to be 400 feet. Others say nearer 500 feet.

Mike went on to graduate from TCU and Wally went to the "big leagues" and was outfielder for the Dodgers.

Homeruns that are hit extremely high and towering in the sky are still called "moonshots".  Several times that term was used in the 2019 World Series.

With all the excitement in Amarillo and the semi-pro baseball team, the Sodpoodles, we should share a another bit of Moore County baseball history.​ 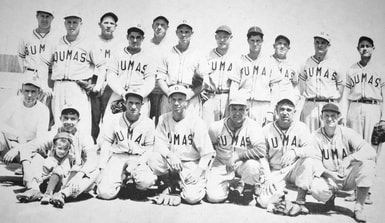 One of the backers of the team was J. R. Yell. He organized the Dumas Dusters in 1948. One of the players on the team was Mike Salim, who was encouraged to come to Dumas by a teammate on the Texas Christian University baseball team, Ray KcKown. Ray brought Mike to Dumas in his "jalopy Ford," according to Mike.

Mike had never been west of Fort Worth and as they turned north in Amarillo and started the drive to Dumas, he began to see rolling hills, the Canadian River - very different from the area where he grew up.

He spent the summer of 1951 working for the Dusters. He was officially hired to "water the infield," since college athletes at that time could not be paid for working as an athlete. 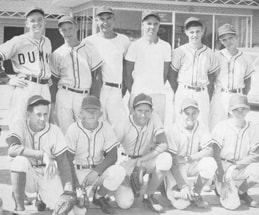 Mike says he lost only one game as a pitcher. That was one for the state high school championship. He loved baseball, but he says, "I wasn't a very good pitcher."

That summer, Mike met Beth Murphy here. She was also a student at TCU, but they met here in Dumas. After graduation, they taught school at Mission High School. Mike was baseball coach and Beth taught Reading and English.

They returned to Dumas in 1953 to help run the Murphy family car dealership. Beth was a teacher, then a member of the DISD school board. Both are now retired.