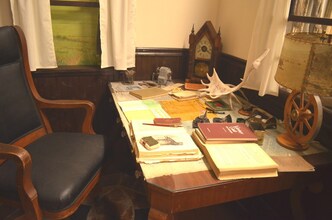 Sneed Ranch Table
.In the early 1900's large ranches were beginning to take shape in Moore and surrounding counties.

One of these was the Sneed Ranch with headquarters on Blue Creek. Original headquarters were on the south side of the ranch. Joe Sneed with a younger brother, John, and an uncle found the land and the two brothers invested in the land which grew as they continued to add to the original purchase.

In 1918, Joe acquired an old three-room house on land he purchased from Lee Morrison. He renovated it and moved the headquarters since it was more centrally located. The Sneed became the largest ranch in Moore County.

Some of the items in the Ranch House display at Window on the Plains Museum came from the Sneed Ranch along with a library table. The table is used as a desk in the museum display. 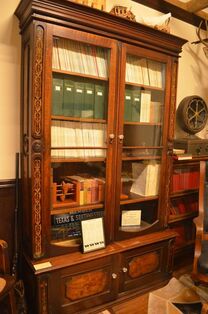 Sneed Ranch Bookcase
The Ranch House display is filled with artifacts from other ranchers including Marshall Cator.

The porch is filled with saddles, a Navajo saddle blanket, chaps, skins, boots and a military saddle and saddle bags. Hanging in front is a dinner bell from the Lew Haile estate. Lew was foreman and trail boss for the Sneed Ranch.

Even the wood on the Ranch House is a testimony to county history. The wood, posts and shingles were salvaged from the Bob Vinson homeplace one mile south of the Middlewell community and is a replica of an early pioneer ranch house (circa 1900-1925).

Museum volunteers traveled with hammers and crowbars to the Vinson land to tear down a barn which had been constructed about 1904.

The wood was then hauled to the museum and, with volunteer help again, guided by master carpenter Vic Lewis and his helper Gene Davis, the building was constructed.

The Ranch House is tribute to the ranching families who settled this raw flat prairie and started making it the vibrant community it is today.
More Bits of History