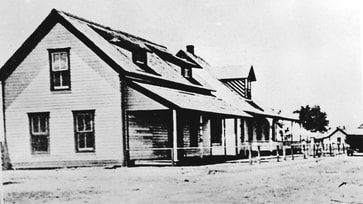 The archives at Window on the Plains Museum reveal bits of history that show the character of the pioneers who came to build Moore County. One of these bits of information came from the son of Jeremiah and Elizabeth Portman who came to Moore County in 1891.

The letter from Ed Portman reads:

Jeremiah Vardaman Portman married Elizabeth Ann Sweeney October 19, 1891. He was twenty-eight and she was eighteen. They had been married only a few days when Jeremiah walked into the Dumas General Store in Van Alstyne, Texas. The owner of the store, Mr. Dumas, was a wealthy man. He owned not only the general store, but many other properties. He was a large stock holder in the railroad that crossed through the Panhandle of Texas. Mr. Dumas made the remark that he needed a young couple to operate a hotel he had built on the wind-swept plains. This hotel was a large frame two story building, completely furnished, and completely isolated. There were no other buildings in what is now Dumas. There were two or three scattered ranches. It was forty miles to the railroad. Jeremiah told Mr. Dumas, "Sir, I am your man."

The railroad owned thousands of acres of land in the Panhandle and they were trying to get families to move out there to homestead or buy land. Many of the settlers lived in what was known as "dugouts". A dugout is something like an old-fashioned storm cellar. Jeremiah and his young bride, Elizabeth, got off the train at the small town of Hartley, about forty miles from the hotel. They hired a man to take them to the hotel. When they arrived, Jeremiah and Elizabeth stood there with their belongings looking at their new home, a very dreary and lonely looking place. The first citizens of Dumas, Texas had arrived.

When looking in the office of the hotel after their arrival, they found the body of a cowboy who had been shot. Their first task in Dumas was to bury the dead cowboy.

After they had been there several weeks, Jeremiah heard a noise at the shed where he had his chicken feed stored. He went out to investigate and found a big white horse trying to get the chicken feed. He got his lariat rope and roped the horse. No on came by and claimed the horse so from then on he had some much needed transportation.

There were always unbranded cattle grazing in the area so they had plenty of fresh beef. Because of all the cattle grazing the range, there was always an abundance of dried cow chips. Elizabeth would scout around and gather up the chips to use as fuel for heating and cooking.

Every time they put up a sign for the hotel, the cowboys would come along and shoot it down. Each day on the plains held a new adventure for the first residents of Dumas.

One couple who stayed overnight at the hotel had a fourteen-year old boy traveling with them. The boy, apparently, was not their son. During the night, the couple slipped away, leaving the boy. He stayed on with Jeremiah and Elizabeth at the hotel. A few months later, another addition was made to the hotel when Elizabeth and Jeremiah had their first child, Ann. There wasn't a doctor within forty miles, so Jeremiah had to deliver the baby.

Now that Jeremiah had a family he decided to homestead some land. During several months, he completed a dugout to live in and moved out on the land, but not for long. Elizabeth became ill and had to be moved to Van Alstyne, Texas. When Jeremiah went back to his homestead a few weeks later he found the boy and his white horse were gone. His neighbor who lived on another homestead was also gone. With all that had happened, Jeremiah decided he didn't want the homestead. He returned to Van Alstyne where they lived for many years. They moved to Oklahoma in 1918 where they reared a large family and lived the rest of their lives.

About thirty years after they had returned to Van Alstyne, Jeremiah had occasion to be in Jacksboro, Texas. He was traveling in his buggy, so he had to leave his horse overnight in the livery stable. The man who operated the livery stable was middle aged, about forty-five years old. He recognized Jeremiah; the was the boy he had left at the hotel while he took Elizabeth and Ann to Van Alstyne. The man explained that he had to leave because he ran out of food and that most people who lived on the homesteads close by had also left. He rode the big white horse all the way to Jacksboro, a distance of about three hundred miles. He first got a job at the livery stable, but after several years he was able to purchase it and become the proprietor.

​From Letter to the Museum from Ed Portman, September 1991
More Bits of History