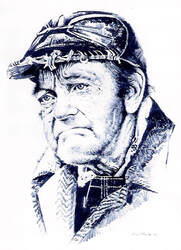 Sam Russell
Sam Russell was a colorful Dumas figure from the late forties until his death in 1972, a few days before his 72nd birthday.

Sam was born March 31, 1900, in Ouachita County near Sayre, Oklahoma. He came to Moore County when he was in his forties.

He lived in a small house north of Texoma Park in northwest Dumas and walked all over town. He never owned or drove an automobile during the 36 years he lived in Dumas.

"Sam" was known by most of the people in Dumas. He worked at odd jobs over the city and regularly visited the local restaurants and coffee shops. He may have had money in his pocket, but always enjoyed the coffee or pie that others bought for him.

Sam picked up some income by the sale of soft drink bottles that he picked up on his regular walks over the city. He was reported to have some other independent sources of income. On his death, a local church was named benefactor of his estate.

He was in frequent attendance at various Dumas churches. Stories are told that "Sam" never missed a funeral. He was offered a ride home from funeral one day and as he was getting out of the car, he asked "Who was that funeral for?"

"Sam" is buried in Dumas Cemetery.

From the archives at Window on the Plains Museum