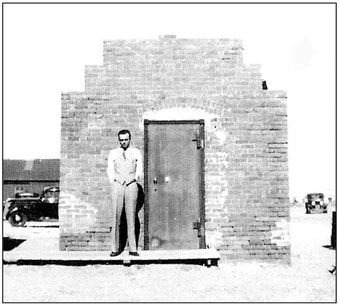 First State Bank Vault
Soon after Dumas was incorporated in the 1930's, Sam Hamilton was hired as a night watchman to patrol the city. Sam had come to the Texas Panhandle from Banbridge, N. Ireland, in February of 1908. He worked at a variety of jobs -- a farm hand, a mill worker at a mill in Hartley, as a mail route carrier and a freight carrier.

During his short career as a watchman, he was kidnapped and help captive, not once, but twice!

The first time, he was making his rounds early in the morning of April 12, 1931. He noticed four men sitting in a car parked on Sixth Street. He flashed his lights into the car and found himself looking into four gun barrels.

He did not argue when he was ordered into the car and was blindfolded. He was guarded by one of the men, while the others went about their illegal activities. Their object of interest was The City Café where they were waiting for the manager, W. H. Clark, to bring out the day's receipts. They were too late, Clark had already left with the money.

The robbers got tired of waiting and entered the café with guns flashing. They decided to rob the night cook and dishwasher. They were still out of luck -- there was only six dollars in the cash register.

They left town taking Hamilton with them and released him some 20 miles north of Dumas.

Hamilton, the cook, and the dishwasher gave law officers accurate descriptions of the four lawbreakers and they were later arrested in Henderson, Texas. The four were returned to Dalhart where they were also wanted for robbing the Dalhart office of the Fort Worth and Denver depot.

Sam had keys to one of the gas stations and would pump gas for people after closing hours. Less than two years later, Hamilton was again making his rounds when he was asked by three men in a car to fill their tank. While one asked about roads and distances, the other two walked about to stretch their legs. As he was capping the tank, the two converged from behind. One took Sam's gun while the other slipped a rope around his wrists. Hamilton, once again, found himself held captive at gunpoint.

This night the robbers were making their second attempt to rob the First State Bank. They had tried a month earlier, when after breaking into the bank, they found they were unable to open the safe. Instead, they took 31 safety deposit boxes.

This time, the thieves brought with them a blowtorch. They did not have a nipple for the torch, so they stole one from Anderson's Blacksmith Shop and again attempted to open the safe. They cut through the outer wall of the safe and were working on the inner door. They tried unsuccessfully for two hours, finally leaving in a panic.

Again, Hamilton was taken with the would-be robbers, but this time they headed in  a different direction. They released Hamilton's empty gun to him and asked him to return the blowtorch nipple to its owner. Sheriff Chester Logue picked up Hamilton and returned him to Dumas.

Hamilton later identified three men picked up in Tucumcari, NM for the robbery and they were brought to trial for the attempted robbery and other area crimes.

History does not tell us how much longer Hamilton was employed as the city night watchman, but according to family records, the family left Texas in 1933 to live in Olney, Illinois.
More Bits of History