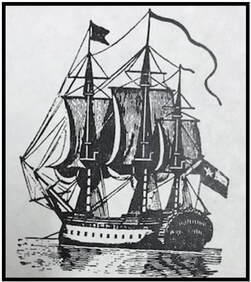 Ship from Texas Fleet
Why is Moore County named after a man who was born in Virginia, joined the U.S. Navy, became commander of the First Texas Navy, was eventually brought to trial for court martial and was called "an outlaw and pirate" by Sam Houston?

​The story begins in Alexandria, Virginia, when Edwin Ward Moore, a member of the U.S. Navy, resigned his commission and became commander of the First Texas Navy.

In a speech given July 9, 1992, on the observance of Moore County's Centennial by Billy Bob Crim, President of The Texas Navy Inc., he outlined the events leading up to the organization of the First Texas Navy.

"In 1836, when Texas proclaimed its independence, the small nation was immediately faced with invasion, on land and sea by overwhelming forces from Mexico, a power having many times the population and naval and military resources of the infant Republic of Texas. The Texas Army finally triumphed over its larger and much better equipped foe at San Jacinto but historians now agree that one of the most important elements in that great victory was the brief but furious maritime activity of the First Texas Navy."

The Navy was fighting stronger and better equipped ships of Mexico and was struggling with inadequate supplies and inexperienced seamen. According to Crim, "They also fought pirates and storms, unstable governments and a continuous and inexplicable hostility from the commander in chief, Sam Houston."

Houston released a proclamation in regard to Commodore Moore, "Pirates all, outlaws and pirates. I call upon all governments in Treaty and all navy officers on the high seas to seize these ships and their crews for various acts of disobedience, contumacy and mutiny." 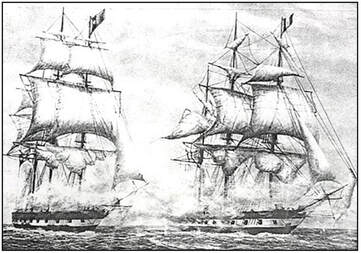 Two ships from the Texas Navy fleet
Moore replied to Houston's proclamation, "When statements are made reflecting on my reputation, not found in law or fact, I hold it to be my right to correct these statements and then to expect him who made them to render me justice."

Crim outlined the events of the Texas rebellion against Mexico. As Houston's army began to march by land, the need for protection of sea supplies became imperative. "Because this small navy kept supplies from the overextended Mexican forces, Santa Ana at San Jacinto had to send one column of his men to collect food and forage. The Texians attacked the divided force, won the battle and the war."

The victory brought to an end the First Texas Navy. Houston ordered the ships to return to Texas. When Moore heard this, he sailed and docked at Galveston. He and his crew received a hero's welcome. They paraded down Broadway, received a 21-gun salute and Houston was hanged in effigy.

Houston refused to accept the decision and successfully blocked Moore's efforts to be transferred back to the U.S. Navy. It was nearly ten years before Commodore Moore received, in part, the salary and other benefits due him.

Crim stated, "After 150 years, historians still debate the reasons for the long drawn out hostility of Houston toward his sea arm and his continued personal feud with Commodore Moore. As strong minded a man as Houston, Moore was also a man of great patriotism and devotion to the Texas cause."

Crim describes Moore and his early life, "He was born in Alexandria, Virginia, on July 15, 1810, to an old Virginia family. He attended the Alexandria Academy and one of his classmates was Robert E. Lee. At the age of 14, he was sworn into the U.S. Navy as a midshipman and served for 15 years before commanding the Texas Navy. Throughout his career, Moore had a first-rate service reputation. Even his severest critics never found fault with his competency." He was described as a man of "science and undaunted gallantry." He was five feet eight inches tall and fair complected with blue eyes and dark hair. He spoke both English and Spanish.

"Once his day of glory passed, Texas and the world lost sight of Moore. Few, indeed, are those who know he ever lived."

His achievement might be summed up in  a poem published on January 7, 1842 in the Austin Daily Bulletin: ​
More Bits of History