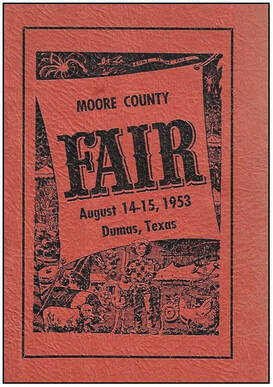 W. J. Morton and Charles Sheldon founded the Moore County Fair in 1953 to give citizens a place to exhibit agriculture, culinary, fine arts and livestock.

Big changes were made in the 1956 fair, when all exhibits were held in one place -- the National Guard Armory at Fourteenth and Maddox. In order to make the fair "bigger and better," several first-time attractions were added. A midway with rides was furnished by King Brothers Carnival, complete with a Ferris wheel. More exhibits were added and for the first time, money prizes were given.

The Moore County Community Building was built in 1964, giving the fair a larger place for exhibits.

In an article in the Moore County News-Press on September 8, 1994, Charles Sheldon Jr. and Doyle Terrell were interviewed. 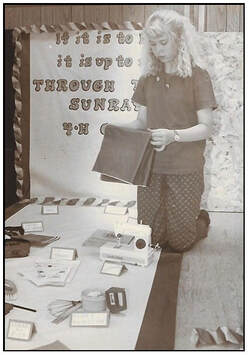 Preparing an educational display
Charles Sheldon Jr. said he had worked with the fair since its beginning -- first helping his father and then taking a leadership role. Both men shared a common goal; they "want the fair to grow and for more people to get involved."

Terrell focused on getting more people involved. "If it can be grown it can be shown. People want to know what we can raise here in Moore County. You can raise almost everything and we want people to bring it all."

Both men were involved with the fair until it finally stopped. The last fair was in 1999, on September 9, 10, and 11. That fair was dedicated to the late County Judge Jack Powell who had been a big supporter.

One of the most popular parts of the fair, was the old-timers reunion. The old-timer was chosen from those in attendance who were over 65. Some of the old-timers to receive the honor were Charley Jameson, Mrs. F. S. Makeig, Bessie Wells, Harry Record, Jewel Henderson, Albert Jones, Willie McClary, Helen Messenger, Josie Feltz, John Walker, Irene Stevenson, W. H. Ham, Mrs. Oscar Mills, Fay Morton, and Willie Morton.
More Bits of History