In the midst of The Great Depression, an article in The Moore County News highlighted the news of the past year. The article was dated January 1, 1932, and was headline Goodbye 1931; You Weren't so Bad To Dumas & Moore Co.

The story begins: "Most businesses find it necessary to take inventory at least once each year. Cities and towns, too, find this of times a valuable custom. If you have any doubt as tot he progress and development of Dumas and Moore County during the past year, then perhaps the following review will be helpful. In it, we have summarized from the files of The News, the outstanding happenings of the past year in this vicinity."

"One hundred and fifty miles of gas pipelines were laid in the county, mostly for the Texoma Natural Gas company.

Numerous extensions were made to water and gas mains in Dumas.

A refinery was built at Sunray. 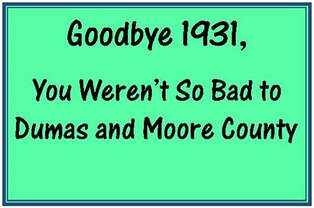 Rails were laid into Dumas. And the Santa Fe line was completed giving the city rail connections for the first time. Also, a railroad celebration was staged in May which was one of the biggest and best affairs of its kind ever held in the county.

The town of Etter was established (and named, after controversy).

Three elevators were built and an industrial site established by the Texoma Gas Company.

Sewer bonds were voted, but the system has not been installed due to failure to sell the bonds.

Curb, gutter, and sidewalks were put in on four downtown blocks.

A gas pipeline was laid from the townsite well to Stratford and Boise City and the well now supplies these two towns.

The key rate on fire insurance was reduced materially.

Goodwill trips were made by Dumas citizens to Boise City and Dalhart.

The largest wheat crop ever made in Moore County was harvested and sold for the lowest price ever paid here.

A new $85,000 school building was completed at Sunray.

The annual rodeo and cowboy reunion had its most successful year last August, in spite of low wheat prices or other economic factors.

The September term of court in the new courthouse saw the disposition of the largest criminal docket in the history of the county.

Bonds were re-voted to pave the TOC through the county.

A cereal mill was installed here.

The north and south highway through the county was given a new designation being changed from No. 115 to No. 9. This move placed Dumas on one of the State's cardinal arteries.

Merchants, through the Community Club, sponsored two successful series of "Dumas Days" to promote trade. Both were highly successful.

If 1932 doesn't look bright to you, then just scan the above record. Who knows but that 1932 will bring even bigger and better things. You can't go  wrong on Dumas and Moore County. Depressions to the contrary, notwithstanding."
More Bits of History