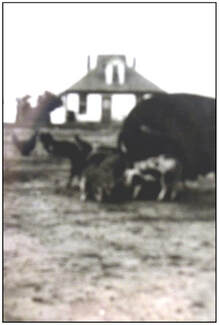 Mills Farm Home
J. C. "Jim" Mills came to Texas from Tennessee at age 14. His first job was working on the railroad in Fort Worth.

He was working as a cowboy near Burkburnett when he met Sarah Louise Helm. They were married in 1886 and lived in a dugout at one of the ranch line camps. Later, they lived on a farm in Oklahoma before moving to Moore County in August of 1907, seeking a better climate for Sarah who had some health problems.

The trip took three weeks. They brought with them their six children, John V., Tom, Oscar, Hattie, Allie,and Dennis and all their possessions loaded in three wagons. They settled in the Palo Duro Community in eastern Moore County.

The hope of a better climate for a "sickly" wife and the promise of land lived up to expectations and the family put down roots that exist even today.

According to a story in a July 1979 , edition of the Moore County News Press, daughter, Hattie remembered, "Apparently brought all the chickens they had and nobody wanted to drive the chicken wagon because it smelled bad." They also brought all their cattle, which the boys walked and herded on the trip.

Dumas had only two stores then and a post office.

The oldest son, John V., married Pearl Henderson in a ceremony in the Henderson home. They traveled by buggy to Dumas, then by train to Dallas for a honeymoon trip. They returned to Dumas and made their home on South Dumas Ave.

Tom married Delphia Henderson, a sister of Pearl's. Tom worked as a cowboy and later farmed and raised cattle.

Oscar married Inez Capps on a snowy day in December. The couple sat on a buggy while the preacher stood in the snow for the ceremony. Oscar farmed, ranched and later became a cattle dealer in the Panhandle. 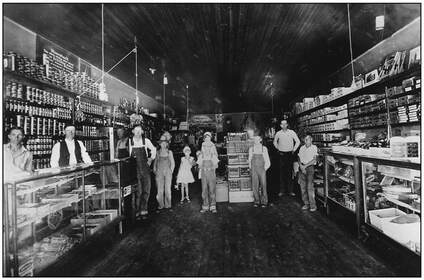 Mills Merchantile
Hattie married Charlie Phythian and they spent most of their life in Colorado.

Allie married Hodge Haile and the couple lived in the Dumas and Amarillo area.

In a family history written by Fern Burnett, daughter of John and Pearl, "At this time there were a few buildings in Dumas -- Phillips and Son, First State Bank, Walkers Store and Wallace Hotel. Helfin Brothers Store and the first Post Office shared a building. Located behind Wallace Hotel was a wagon yard and blacksmith shop. The wooden courthouse was surrounded by barbed wire with stile blocks located on the west and north sides. The water well stood in the northwest corner and everyone carried water from this well."

The family history tells of John attending Draughan's Business College in Dumas, then in Oklahoma City. He worked his way through school as a barber during the day and by playing the fiddle at night for dances.

In 1908, he was appointed deputy sheriff and tax collector in Moore County. He was elected sheriff in 1912 and served until 1918 when he purchased a business. He named it Mills General Merchantile Store and operated it until 1943. After leaving the retail business, he served again as tax collector for another twenty years. He also served on the city commission from 1930 to 1947.​ 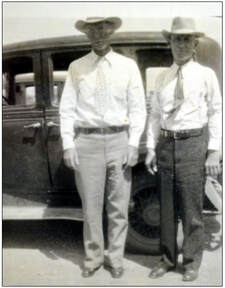 Tom and John Mills
The family history related a couple of stories that happened when John was Sheriff. Dr. Hale was the local doctor and pharmacist. "A fellow got mad at the doctor who also ran the drugstore where Powell Abstract is and started a fuss. This fellow pulled out a dirk and stabbed the doctor once in the store and again as the doctor ran out the door. Former Sheriff Jo Wynn stopped him and took a .44 caliber pistol out of his belt." The doctor recovered from his wounds. The assailant was arrested.

The second story involved the arrest of a young man for the break-in of a store. The county had no jail, so the sheriff took him home and handcuffed him to a bed in an upstairs bedroom until he could be moved to the Dalhart jail.

Tom and Oscar were instrumental in organizing the first rodeo in Dumas. The first arena was formed by cars, trucks, and wagons parked as a fence around an area in the south part of Dumas. Later it was located on the north side of the city. Prior to World War II, the area was located west of Dumas.