In a popular child's fable, Chicken Little thought the sky was falling! Parts of the sky -- in the form of meteorites -- have indeed been found in Moore County.

A large rust-colored stone was turned up on the James Medford farm near Etter in 1966. It measured about 19 inches long and 10 inches tall. It stayed on the farm for some time until the Medfords were reading an article on meteorites and wondered if their rock might be a space rock. 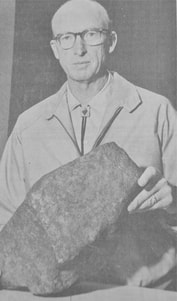 Glenn I. Huss
Glenn I. Huss, director of the American Meteorite Laboratory in Denver, CO. was contacted and a chip of meteorite was sent to the laboratory. It was analyzed and determined to be part of a larger body that broke while still burning in flight. The break area was fused over indicating it was still burning after it broke off. The laboratory director stated the stone had probably been on Earth a considerable length of time -- probably several hundred years.

The Medfords were offered $4 a pound for the 102 pound meteorite and it was shipped to the laboratory in Denver where it was named the "Etter Meteorite."

The Etter space rock was the second to be found in Moore County. The first was a 101 pound rock found 14 miles southwest of Dumas in 1956. Huss stated there are probably others in the area that had fallen off the same meteorite.

A few years later, Martin Green, an employee on the Thurman Fisher farm, nicked off a piece of a large stone that had been dug up while digging a farm pond. He sent the sample to the Denver laboratory. This 70 pound space rock was found about 1-½ miles northwest of where the Medford meteorite was found.

Three years later, Green found two more fragments, the largest a 151-½ pound fragment. The second was a 13-½ pound rock apparently from the same fall. These "find" were on land belonging to Mrs. John R. Powell, just across FM 281 from the Fisher farm.
Green says he was "working in a cornfield when the chisel on his fertilizer rig hit something about a foot deep and the whole rig stopped." He took a shovel off the tractor and began digging.

He soon saw enough of the rock to recognize what it was. The American Meteorite Laboratory in Denver sent its director, Glenn I. Huss, to collect the specimens.

Huss believed there are more "space rocks" to be found in Moore County and urged anyone who thinks they have one to contact the laboratory in Denver. The rocks are usually heavy, rust-colored stones and may have been plowed up in fields or uncovered by erosion. Meteorites are buried in the ground on impact, sometimes several feet down. Some make a sizeable crater.

While meteorites vary in makeup, most of them contain a high percentage of iron and sometimes nickel. Some have almost the same makeup as stainless steel and can be polished to a shiny metal lustre.

A meteor is a small particle of matter in the solar system that may have traveled millions of years in reaching the earth's atmosphere. When one falls into the earth's sphere of gravity it creates an incandescent glow.

However they are found, there was money in those outer-space rocks, as the James Medfords and Martin Green learned.

Compiled from Archives at Window on the Plains Museum