Helen Danner came to Moore County in 1909 with her parents, Mr. and Mrs. J. W. Danner. The family bought a wood-frame house one mile east of Middlewell.

The Danners had four daughters. The oldest, Helen Grace, became a teacher and taught one year near Etter.

She married Clyde Messenger, September 6, 1916, in Stratford. They made their home in the Middlewell Community.

In an interview in 1972, Mrs. Messenger, told how her family came to Moore County. "This part of the country was being just settled up and there were land people, land sellers, we called them, real estate men, and they came t o Illinois where we lived. And they were trying to get many people to come down and look at land and buy. They brought them, of course, by train. They brought the, well I would say, a whole coach on the train full of people. My father and mother came just to look things over and became interested and bought one section of land. And in a short term later, my grandfather came, and he bought another section. It was the beginning of our holdings in Moore County."

She went on to tell how one of the landmen met the train in Channing and brought them in a Reo car to the Middlewell Community. They stayed in a house equipped with lots of cots for sleeping and where meals were prepared for them.

Mrs. Messenger was asked how Middlewell was named. She explained, "Well, before we moved here in 1909, this used to be all open country. And people would just run their cattle altogether. You have heard of round-ups. They would round-up two or three times a year and separate the cattle and have them branded and that's the way they claimed their own. And, of course, water was a great problem, and so wells were dug spaced far apart. There was a west well, and that is just north of Channing about four or five to six miles, in that vicinity. And then, the middle well was another well that was centrally located. Then, they have an east well, was on the Killgore Ranch, way south, just west of the helium plant. I remember those three, but they were named because of their locations." 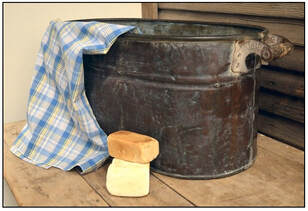 Wash day meant boiling water in the copper pot, using homemade soap and then hanging clothes outside on the clothes line.
In the interview, Mrs. Messenger told about carrying water to heat to do laundry. She said many women had to wash in iron kettles outside over an open fire. Her mother was fortunate to have a copper boiler that was put on the range in the kitchen where clothes were boiled.

Then, she was asked about making soap. "Well, we butchered all of our pork and I would make soap out of the cracklings, if you know what cracklings are, rended lard. I have such a wonderful recipe for making cracklings soap that you cooked only five minutes. And I have a large iron pot. It held 35 gallons, that large. And I would make that full."
More Bits of History