Town with Two Names is No More 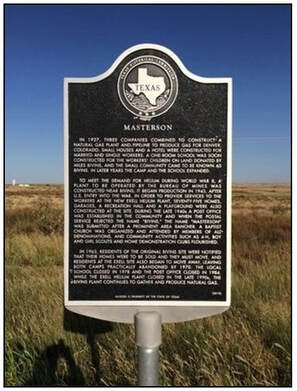 Historical marker 19 miles south of Dumas
The road between Amarillo and Dumas goes through mostly ranchland, but passes through what remains of a town that has had two names.

The town, 19 miles south of Dumas, began in 1927 - 1928 as a compressor station to service a 22-inch gas line to supply compressed natural gas to Denver, CO. The plant was built on land owned by Lee Bivins, Panhandle rancher.

The town was first named Bivins after Miles Bivins, son of Lee Bivins, who donated land for a one-room school to be built. In its peak, it had a school, a two-story frame hotel, a company store, a church and houses for employees of the gas company.

In 1931, North Plains and Santa Fe railroad built a line one mile south, then angled the track northwest. For the convenience of local ranches, they established a cattle loading site complete with scales and loading pens.

In the late 1940's, Excell Helium Plant was built three miles west and housing was constructed for employees and their families.

Application was made to open a post office, but the application was rejected because of the name "Bivins." A town in Cass County, south of Texarkana, was already named Bivins. The name "Masterson" was submitted and the post office was opened in January of 1950.

The town was named after Robert Benjamin Masterson, a prominent local rancher. Both "Bivins" and "Masterson" names remained part of the town. The school was called Bivins school and the building, now a church camp, still has the name on the building. The school closed in 1978 and the post office closed in 1984. The little store that was opened in 1946 and housed the post office closed, but the building remained for 70 years. It was finally demolished in 2019.

In 1963, Excell notified residents that the housing units would be closed. Residents began moving and the town slowly became a ghost town. The houses in the camp where CIG employees lived were also closed and sold. The Excell plant closed in the late 1990s.

Whether the town is referred to as "Bivins" or as "Masterson," all that remains are the vacant buildings of the Excell Helium plant and a scattering of buildings that still house the compressors that send the natural gas north to Denver.

A roadside marker along the highway tells the story of the little town.
More Bits of History