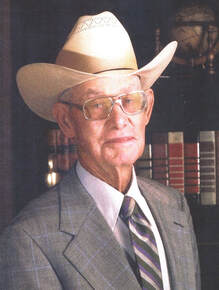 Marshall Cator
The legend of Marshall Cator began in 1902 when he was born in a sod house near what is now Morse.

He was riding horses at age three. He began working for his uncles, James and Bob Cator at age 11. His uncles paid him with a heifer calf for his work with their cattle. This was the start of his career in ranching.

His love for cattle led to him holding leases on such historic ranches as the LX, SL, Killgore, Coon, Nance, and Lipps.

According to his close friend, Harold Courson of Perryton, "He probably had half a million acres leased at one time."

Cator worked along side the cowboys on his ranches. He was always very involved in branding, weaning and shipping of his cattle. He was still working cattle when he was hard of hearing and his eyesight was gone. Yet, he could still round-up cattle by listening to sounds and letting his horse be his eyes.

He was acclaimed to be the best heeler to drag calves to the branding fire. As his eye sight failed, his rope missed sometimes, but he still could rope as well or better than many cowboys.

One story told about Cator involved two Canadian bankers who, during the Great Depression, came to the Cator Ranch to call a note. They found him on a windmill tower in a gale force wind and freezing temperatures making repairs on the windmill. They were convinced he would make it through the bad times and renewed his note.

Cator was a supporter of Cal Farley's Boys Ranch and in 1985 he donated funds to build and furnish a house for the Borger Campus. He wanted it dedicated in memory of his cousin and long-time business partner, Vina Hawpe. At the dedication, he said, "I just hope the kids like it. I hope this makes the kids a good home and that's all I have to say." On his death, Boys Ranch received more than 14 sections, almost 9,100 acres, of land in Moore and Sherman counties.

In 2000, Cator received the Chester A. Reynolds Memorial Award presented by the National Cowboy Hall of Fame. When he stepped to the microphone to receive the award he stated he didn't deserved to be honored, thanked everyone and then sat down. The Cowboy Hall of Fame said "Known for his cowboy skills, integrity, friendships, generosity and quiet modesty, Cator exemplifies those qualities for which he is being honored." In response to inquiries about his legendary skills and achievements, Cator said he is "just a man who spent a lot of time minding my own business."

He was still riding a horse until a few months before his death. When asked about his longevity he replied, "If you sit down in that rocking chair, you get to where you can't get around. If you keep going, you'll keep going."

Cator died a few months short of his 100th birthday.

He never married. He said he didn't have time. 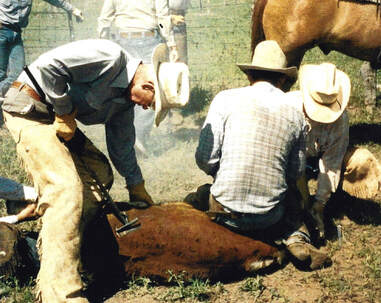