Letter to the Editor
By Glynda Pflug

When searching museum archives files, you never know what treasures you might find.

One treasure was a letter to the editor written to the Moore County News Press in 1987. It was signed by Rev. I. E. Walker of Edna, Texas, who served the First United Methodist church here in Dumas from 1929 to 1933.

Rev. Walker was writing in response to an article in the June 11, 1987, edition that featured Mrs. Bessie Lee Wells who was selected Old Timer of the Year for the Lions Club Dogie Day celebration. Rev Walker was a brother to Mrs. Wells and also an uncle of Dumas resident Gason Wells.

The letter tells in Rev. Walker's words the story of coming to Moore County, of attending at the Palo Duro school, of working as a ranch hand and as serving as pastor of the church here. The letter is reproduced as he wrote it:
"Dear Editor:

Recently there came into my hands a copy of the issue of your paper for June 11 and I am writing this letter to you in appreciation for the effort it shows in presenting the history of Moore county and of Dumas and the people who wrote that history with their lives. I was a part of that history and it was great to have my memory refreshed and my pride in settling of that section of Texas rekindled.

I was part of the wagon train that moved from Greer county, Oklahoma to Moore county in 1902. My sister, Mrs. Bessie Lee Wells, who was selected as your "Old Timer of the Year" for 1981, told accurately of the migration. It was a far cry from the rapid transit to which we are accustomed. I well remember that when we came in sight of the house that was our home, we had not seen a house for 50 miles.

Palo Duro school was the only public school I attended in Texas, my "Alma Mater" so to speak. I do not think I finished the school, I just out grew it, and went to work on the Watkins Ranch, where I stayed for two years, and during that time I was one of the outfit that made the drive of 3000 head of steers to Texhoma. One of my valued pictures is of the 21 men on their horses, the chuck wagon, etc. It is dated April 12, 1911.

While I was working for Watkins, we were often loaned to the Sneed Ranch for special drives. When this happened, Lew Haile was Wagon Boss and we became friends. Years later, I was sent to Dumas as pastor for the Methodist church and twice a month I preached at a Shamrock Camp near Lew's home. He rarely missed a service and always led the singing. This was a side of Lew that few people knew about. He called himself my "Tune Heister." 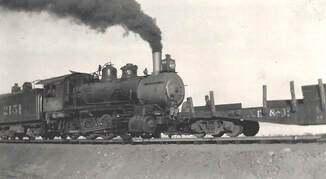 We shared in the many events of 1931. I was a charter member of the Lions Club and the first tail twister. I was on the program at the dedication of the new courthouse, and when the first train pulled slowly into Dumas; whistle and bell going full blast, I was one of the four or five men riding into town on the cattle guard. I know Noel McDade was one of the others but that is as far as my memory takes me. We joined in the marching to the picnic grounds and then back to the revival tent our church had provided for services and which we were happy to share with throngs of people in town for the day.

Not all the things your paper called to our minds were happy ones. We had moved to other fields in 1943 when polio struck. But, we had two daughters working for Cactus, and one of them, Ernestine, was one of the nine struck down by that dreaded disease, a fortunate one who survived.

Thank you again, you and your staff. A special thanks to my great nephew, Mark Salim, chief wrangler for the day."