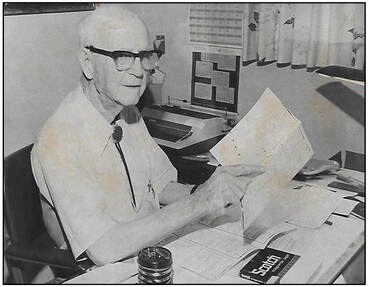 Judge Woods Coffee Jr., Historian
History and particularly, family history, was important to Woodson Coffee Jr. He spent much of his life preserving history and researching to find facts about his family.

Woods, as he was known, was born May 29, 1895, in Throckmorton County, Texas. His mother, Ollie Pickens Stribling Coffee was visiting her parents when he was born. Sometime later, she returned to Roberts County where she and Woodson Coffee Sr. made their home. She traveled with a five-year-old daughter, a three-year-old son and infant Woodson. They rode the train from Throckmorton to Claude, then took a ride in a mail hack to Panhandle and finished the trip to Miami by train.

Woods grew up in Miami and attended school there. In a letter to his sister, Ruth Coble, written probably in 1980, he wrote, "Things were certainly different in those days. At any rate, I would not take for the memories that I have of my boyhood days. At the time, I sometimes though they were pretty hard, but on the whole they were pleasant."

One recollection he made was almost not "pleasant". Woods had watched an older boy trip a steel trap that his father had set for skunks. He thought he might do the same thing. "Fortunately, as the trap closed on a finger, it also caught the stick which held the jaws apart enough to spare the finger from serious injury," he remembered.

Woodson Sr. helped his sons learn farming by letting Woods and an older brother, Ben, farm 100 acres as they were growing up.

Ida Mae "Mamie" Begeman was postmistress at Miami when she and Woods were married on June 10, 1916.

Woods attended Draughon's Business School in Dallas. The couple was living in Denver, Colorado, when their daughter, Evelyn Marie, was born on December 5, 1925.

Woods was in the lumber business in Pampa for five years, then later the family moved to Silverton where he served as Briscoe County Judge from 1932 to 1943. He became  known as Judge Coffee and carried that title the rest of his life.

His interest in farming brought him to Moore County in 1953 following the death of his father. Woods' father had begun buying land in Moore County as early as 1911 and Woods had inherited some land from his father. He and Mamie moved to Dumas to take care of the farming interests. The moved into their home at 114 Cherry.

He became interested in researching his family history -- both the Coffee and his mother's family -- Stribling. The couple did a lot of traveling in search of parts of the family histories. Often, they carried a copy machine in the trunk of their car in case they found papers they needed to copy.

Mamie was active in local study clubs and especially in First United Methodist Church where she presented many programs for the Methodist Women's Society.

The couple were charter members of Moore County Historical Museum and helped with the organization of the museum in the Lew Haile Annex of the courthouse. He did many  interviews with "old-timers" and those interviews are part of the archives at Window on the Plains Museum.

Woods became a member of Masonic Lodge 754 when he lived in Silverton. He was a member of the Scottish Rite and a member of Khiva Temple. His grandfather, Cornelius Kincheloe Stribling had been instrumental in establishing many Masonic Lodges in Texas and Woods visited each of them.

Mamie Coffee died June 2, 1984, and Woods followed on September 1, 1984. Both are buried in Llano Cemetery in Amarillo.
More Bits of History