Josie Feltz Recalled Life on the Farm
By Glynda Pflug 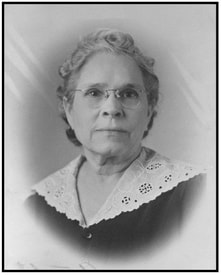 Josie Feltz
Samuel David and Mary Ida Ham came to Moore County in 1906 and settled on a farm in Middlewell - land, but no house - and started their home in a dugout.

Young Josie was twelve years old and the youngest girl of ten children. She started attending school in Middlewell School with Mr. Makeig as her teacher. About twenty students were in the school.

A young bachelor moved to the neighboring farm "a year or so" later, according to Josie. He lived in a dugout, but boarded with the Hams. The young couple fell in love and John asked Josie's father for permission to marry Josie. Her dad gave his permission, but since Josie was a few months shy of 17, John had to have written permission to get the marriage license. John forgot a "small item" when he made the trip to the county clerk and it required a second trip to get the license. Josie said the reason he married, "he found out I could cook."

The couple was married on December 23, 1909, in the bride's parent's home. Following the ceremony and a large wedding dinner, the newlyweds went to Channing and boarded a train for Fort Worth to spend Christmas with John's parents. 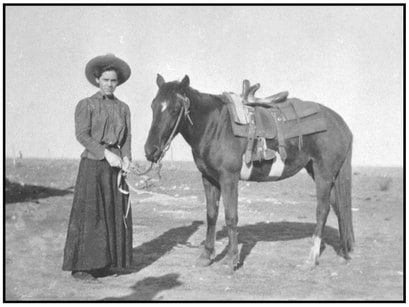 Josie Feltz
They returned to their dugout home and lived there until a house could be moved in from Channing. The couple became parents of three children, Florence, Charles, and Phillip.

In an interview with granddaughter, Georgia Tyler, Josie remembered a snow storm in the winter of 1918 - 1919. She said they were not able to move their car, a "little old Ford", for two months. There were not paved roads, so travel anywhere had to be done one horses. The family had "meat hanging from the windmill" so they always had meat. Josie cooked on a coal cook stove and used cow chips for fuel.

She raised turkeys and dressed them and took them to Dalhart and Amarillo to sell. She remarked, "Had to leave the heads on so they'd know they wasn't buzzards."

In addition to the turkeys and cattle, they also raised guineas and chickens. Hogs were raised and the fat was rendered and used for shortening. "Even made cakes with lard" and made their own soap from the 'cracklings'." 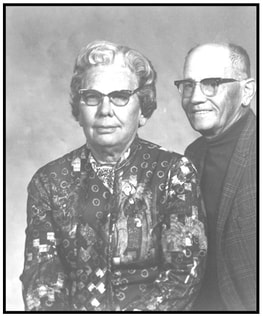 Florence and Sam Oliver
"John made a trip to Amarillo one winter to get cake for his cattle," Josie recalled. On the return trip he "got as far as the Crawford Ranch and couldn't come any farther. The heavy weight of the cake on the trailer John was pulling caused the car to "shove off to the side." And there was a young serviceman and his wife who had stopped there in their car." They invited John to get in with them. Neither care had a heater.

In the interview, Josie remembered the good things about living on the farm. She said, "Well, you pert near made your living on the farm." People enjoyed getting together for parties. "After church, we all went to one place and we had singing."

At Christmas time, the Hams and Feltz would take a wagon and go to the breaks along the Canadian River and cut down a cedar tree. They would make colorful paper decorations and string popcorn. A big meal was always served on Christmas Day -- a big turkey and dressing, home canned vegetables, sweet potatoes, potato salad, homemade bread, mincemeat pies, chess pies and fruit cake.

Josie was a charter member of First Presbyterian Church and served on most of the church committees. She was an active member of Eastern Star, joining in 1928. She served as a worthy matron of the Dumas chapter from 1933 - 1934. She was deputy guard matron for the area in 1936 - 1937. She was named Old Timer at the Moore County Fair in 1975. She served as president of the American Legion Auxiliary.