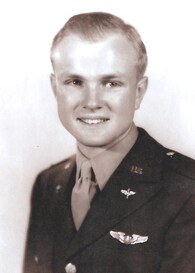 When the Japanese bombed Pearl Harbor, many young men knew their country needed soldiers and enlisted in one of the branches of service.

One of those young me was Herb Harter of Dumas. Two weeks after the bombing, enlisted in the Air Force. He was a student at Amarillo College and had been doing some flying while in college. He already had a pilot's license.

Herb was a member of the Jeter Bug Crew, named after the plane's pilot, Frank Jeter. Herb was co-pilot. The B-24 bomber had an 11-member crew.

On their 21st mission, they were to fly to Chi Chi Jima, almost 1,000 miles to the north of Harmon Field. Guam, where they were stationed.

Their orders were to keep clear of the naval task force at Iwo Jima by 50 miles.

They reached their target and as they released the bombs, power was lost to the number two engine. The number three engine had been running roughly for about half an hour. The plane did not have enough fuel to increase the power of the remaining engines and make it to Saipan.

The crew decided to take their chances with an emergency landing at Iwo Jima, where heavy fighting was going on with naval ships and Marines. They received radio clearance and made their final approach to the island. According to an interview with Harter in 2005, "On final approach all firing from the naval ships and Marine positions stopped and we were able to make a smooth landing on the air strip. As soon as we landed, the firing began again, bursts and rounds soaring right over the plane."

The crew spent the night on board the plane and according to Harter, "So, with 1,000 gallons of gasoline, we slept in the plane until morning."

At first light, the crew began working on the plane. They worked for three days to repair the plane before taking off the Iwo Jima airfield. A mission that was meant to be a routine snooper mission turned into an 87-hour long combat mission, one of the longest lasting missions of WWII.

Over the years, the crew kept in contact with each other. A reunion was held in San Jose, CA, where the crew was honored as war heroes at the premiere of a documentary about the Jeeter Bug and the crew's 21st mission. The documentary, The Jeeter Bug, Mission Over Iwo Jima, is part of the military display at Window on the Plains Museum and can be viewed on request.

Moore County veterans all have interesting stories about the time they served our country. Window on the Plains is trying to record those stories and preserve them in our archives. Please call and let us set up a time to visit with you about your military experiences. 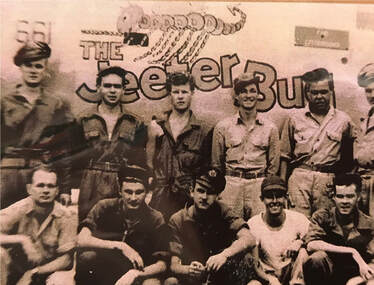