House in Middlewell Built in 1905
By Glynda Pflug 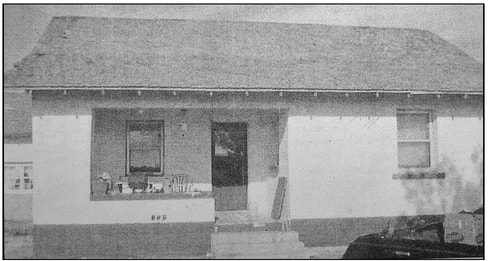 The Jimmy Lee house, built in 1905
The files in the archives room are filled with stories, some familiar, some untold. One file had a story of a house that now is 116 years old.

The house was built by Jimmy Lee in the Middlewell Community. The walls are of adobe bricks made of mud and straw, probably wheat straw. They were made using forms of 2 x 4s about 14" x 8" and 9" x 4". After the bricks dried, they were put together using fresh mud. The roof was attached by notches cut into the top bricks and beams laid in the notches so the bottom board of the roof could be nailed to them.

The house has some unusual surprises. Lee built a desk in the living room that has handles that can be pulled and a hidden bed comes out. The bed is large enough for a mattress and springs.

A door in the hall can be opened and a closet pulls out into the hallway. When the door is closed, the closet slides back into the compartment and is hidden again.

When one corner of the mirror and shelf in the bathroom is pulled, they turn around and behind is a large hidden compartment.

The house has a full basement. Because of the thickness of the walls and the design of the doors to allow a breeze into the house, it stays cool in the summer and takes little heat in the winter.

Lee raised cows and milked them for a living, selling the milk and cream. He farmed 220 acres with a team of horses. He never owned a tractor. 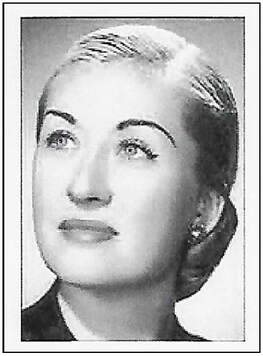 Ann Lee Harris
The Lees had a daughter, Ann, born August 8, 1918. She spent her childhood in the Panhandle, alternating time between Amarillo and at a ranch owned by the Lees near the Canadian River.

She left Texas when she was 16 to study theatre at Northwestern University in Chicago. She had a successful career on Broadway during the 1940s including roles in "Lady in the Dark" and "O Mistress Mine". She had roles in several Hollywood films, including "Boots Malone" in 1952, "Trial" in 1955 and "Mr. and Mrs. North" in 1952.

She married Jack Harris, a well-known rancher and agricultural pioneer who helped promote the California agriculture industry. They lived on a ranch in Coalinga, CA, and in Phoenix, AZ. She helped with the initial fundraising for the Phoenix Zoo.

In the late 1970s, she became interested in building a restaurant. The project, Harris Ranch Restaurant, was adjacent to Interstate 5 at midpoint between Los Angeles and San Francisco. The project was very successful with a steady stream of motorists, as well as private plane passengers who utilized the private landing strip onsite.

In 1984, she gutted and renovated a San Francisco building to build Harris' of San Francisco, then opened a Harris' in Phoenix, as well as Cacti in Novato, CA. Her restaurants were award-winning and known for "fine food, fine service."
More Bits of History