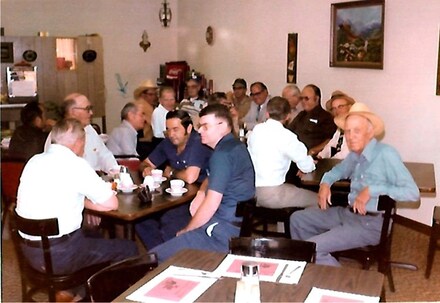 Coffee group, about 1971
Looking through scrapbooks renews a lot of memories about the past, but sometimes teaches us about a part of history that we didn't know. This was true a few weeks ago when Gary Hickman brought us a scrapbook that his mother Eva kept during the time Jack served as mayor of Dumas from 1970 to 1975.

One article not related to politics, showed Jack as one of the founders of a coffee group that started with a group of office neighbors, grew to about thirty "drinkers" and continued for about a decade.

Charter members were Mayor Jack who was the leader of the club, Ike Parks was Jack's associate in the real estate business, office neighbors Herb Harter and City Judge Bob Porter and a couple of other friends who officed near Hickman's Seventh Street office building.

The group met every weekday morning at 10 o'clock and grew to an informal membership of more than 30 persons -- rarely less than 15 in attendance.

The first home for the gathering was the Phillips Manor Restaurant (now Big Country Cafe). At various times, the group met at other restaurants -- the Dumas Inn, The Smokehouse, Taco Plaza or El Matador. Whether the group was asked to relocate or just "restaurant hopped" is lost in history, but the coffee drinkers remained faithful for many years. Some of the group would meet again at 3 o'clock, but that group never had the large attendance of the morning group.

When any coffee group gets together, the question arises as to who will pay for the coffee. A unique system called the "Hickman Downs" was devised. Jack came up with the system of writing down the numbers 1 to 20 with each person there secretly writing one of these numbers on a small piece of paper.

Players would call a number in rotation (not their own) and when a player's number is called he is exempt from paying and drops out of the calling. The last person whose number is called gets the check, the next-to-last gets to pay the tip to the waitress.

A player cannot call his own number. If he does, he automatically gets the check.

James Mahaffey was a regular member of the club and printed up some forms to make the game easier. At the top he printed "Hickman Downs." 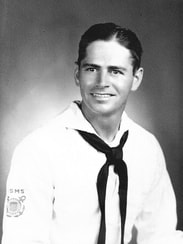 Jack Hickman
Jack Hickman left other things to the history of Dumas and Moore County, not just the "Hickman Downs" coffee history.
​
He ran for the Mayor position when Arthur Baer resigned the position in 1970 to run for County Judge. Jack won the special election for the remaining one year of Baer's term with a record number of votes over his two opponents. He was reelected to a four-year term the following spring. At the end of the four-year term, he chose not to run again, stating "I will not be a candidate for mayor. I believe that five years is long enough for any public official to be in office."

In his column "Howdy", newspaper publisher Dick Reavis praised the work accomplished during his time as mayor. "Jack will be remembered for a lot of things in what was an outstanding administration: Enlargement of the city's water supply, the comprehensive city drainage plan and the sales tax which, almost painlessly, has helped city finances."

Reavis stated that the programs were not one-man jobs, the mayor had a good city commission. But, applauded Hickman's "good business sense" in his service as mayor. The "Howdy" column stated "Dumas is a heap better city for the five years of his plain-talk service."

Jack left his mark on the history of Dumas, not only as a public servant, but his unique coffee group and their "Hickman Downs."