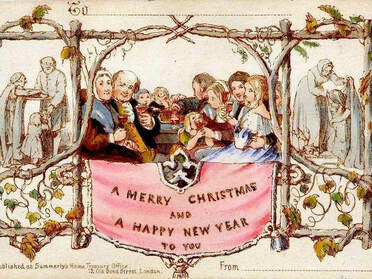 First Christmas Card - 1843
The custom of sending greeting cards can be traced back to the ancient Chinese and to the Egyptians who used papyrus scrolls to send their messages. Greetings made by woodcuts were made in Germany as early as 1400. By the early 15th century, handmade paper greeting cards were being exchanged in Europe.

The greeting card custom started in the United Kingdom in 1843 by Sir Henry Cole. He was a prominent educator and patron of the arts. He traveled in the elite social circles of early Victorian England and had the misfortune of having too many friends.

With a new postal system in place, everybody was sending letters. Cole was a busy man and had no time for answering letters. As his stack of letters grew, he knew he had to respond. "In Victorian England, it was considered impolite not to answer mail," according to Ace Collins, author of Stories Behind Great Traditions of Christmas. "He had to figure out a way to respond to all of these people."

Cole had an idea of what he could do. He approached a friend, John Horsley, an artist. He sketched out what he had in mind. The result was a triptych. The center panel showed a family at a table celebrating the holiday. The two outside panels were images of people helping the poor. He took the drawing to a printer and had 1,000 printed on cardboard. The card was small, only about 5" x 3".  The top allowed a salutation so Cole could personalize each card. The card included the greeting "A Merry Christmas and A Happy New Year To You."  Postage was 1 shilling or about 12 pennies.

Cards appeared in the United States in the late 1840's, but were very expensive and most people could not afford them.

In 1915, John C. Hall and two of his brothers created Hallmark Cards, still one of the biggest card makers today. 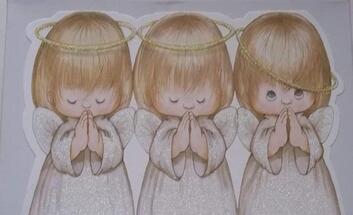 Most Popular Christmas Card
The first known personalized Christmas card was sent by Annie Oakley in 1891. Annie, the famous sharpshooter and star of Buffalo Bill's Wild West Show, was in Glasgow, Scotland at Christmas. She designed a card with a photo of herself wearing a tartan and sent the cards back to her friends in the United States.

The custom of sending cards has declined in recent years. In 2010, 1.5 billion cards were sent in the United States. Forty percent of all cards sent are Christmas cards.

The most cards sent by one person in a year was 62,824. That's enough cards to cover a football field.

The most popular Christmas card of all times is one with the image of three cherubic angels, two are bowed in prayer, the other peering out from the card with big, baby blue eyes, her halo slightly askew. The sentiment reads "God bless you, keep you, and love you... at Christmastime and always." It was first published in 1977 and is still part of the Hallmark collection. It has sold 34 million copies.

Compiled from information in:
"The History of the Christmas Card", Smithsonian
"Greeting Card", Wikipedia