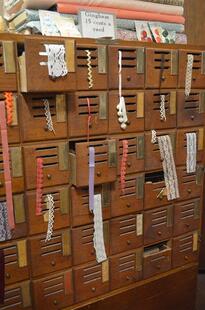 Lace Cabinet
As early as 1892, one stop shopping was an important part of Moore County commerce. The local general store carried groceries, clothing, sewing supplies, tobacco, machinery, medicines, building supplies, seeds and feeds... and everything in between.

C. T. Lambert opened a mercantile business, The Cash Store, around 1892. Lambert advertised in The Moore County Pioneer in the May 17, 1912 issue, stating "in groceries, we carry everything." The business was later owned by John V. Mills.

Around 1900, another general store opened by Arthur Neild. He ran the business until 1904, when it was sold to Jacob Humble Phillips. The Phillips family ran the business at the same location, the corner of Seventh Street and Dumas Avenue until late 1994. The Phillips & Son store was a popular shopping stop in Moore County - carrying the home - even supplies for Boy Scouts. One of the tractors in our barn was purchased new in 1939 at Phillips & Son by Ed Stallwitz. The tractor was donated to the museum by Eddie Stallwitz and the Stallwitz family.

Several items in the museum general store actually came from Phillips & Son and were donated in 1976 when the museum started.

A large cabinet on the back wall was donated by Jimmy Wiseman in 1976 and hold dishes and other items that might have been for sale in a 1900's general store.

Vic Lewis researched and built a replica of a general store counter with bins for beans, peas and other dry vegetables. It also serves as a check-out counter. When it comes time to pay for items, the sale is rung up on a brass cash register, a donation from Jane Bara and the McMurry family.

The museum general store is filled with everything from clothing, to stoves, to cooking spices and canning jars, to toys - just like the early 1900's general stores. It's one stop shopping! ​
More Bits of History