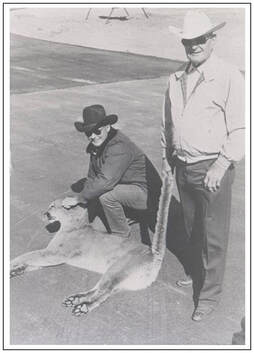 Fuqua Younger, right, and the cougar killed on his land
Seeing a mountain lion in Moore County is not a common sight, but a story in a 1984 Moore County News Press tells about one that was on the Fuqua Younger farm west of Dumas.

"Seeing a mountain lion perched in a tree 100 feet or so away is not an experience that a Dumas man is willing to have more than once.

Claude McFarlin spotted the sleek animal at a farm just inside Hartley County Sunday as he was going about his chores on a Fuqua Younger farm.

That cat was on a limb above the gate I was fixing to open, says McFarlin. I couldn't believe it.

McFarlin turned on the radio in his pickup and got in touch with K. L. Johnson, who lives in the Middlewell community in southwest Moore County, just a few miles from the cougar's perch.

I asked him if he had a gun and he said he could bring one over, says McFarlin.

When Johnson arrived about 10 minutes later, the big cat was still sitting in the tree and McFarlin was waiting -- inside the truck.

Johnson and McFarlin carried the cougar to John's pickup and put it in the bed. The cat seemed to be alive still and Johnson put a pistol shot in him to be sure died.

Younger, a former Moore sheriff and a long-time resident of the area, was amazed to learn there had been a cougar on his place.

I've been all over this country and I've never seen one up here, says Younger. There are quite a few down in the Alpine area, but I've sure never spotted one here.

Ken Jackson, Texas game warden stationed in Dumas, reports that Sunday's incident is the first confirmed kill of a cougar in the Panhandle.

I've talked to wardens who have been here longer than I have and they've never seen one, he says.

The animal shot Sunday weighed approximately 111 pounds and from the tip of his nose to the end of the tail, he was six feet, eight inches.

The cat's weight is considerably less than a full grown mountain lion - Jackson says a mature animal could weigh more than 250 pounds.

Looking at the teeth and considering the weight, he says the animal probably was an immature cougar.

The mountain lion described as the largest North American cat when full-grown.

McFarlin says when he arrived at the farm, a dog that stays there was barking and the bark was different.

I saw that old yellow dog looking toward that tree and he was barking his head off, recalls McFarlin.

When he looked in the same direction, he realized the cause of the dog's near-hysteria.

As far as I'm concerned, the dog is the hero of this story -- I would have walked right under that tree if the dog hadn't been so upset, says McFarlin."

From The Moore County News-Press
February 16, 1984
More Bits of History