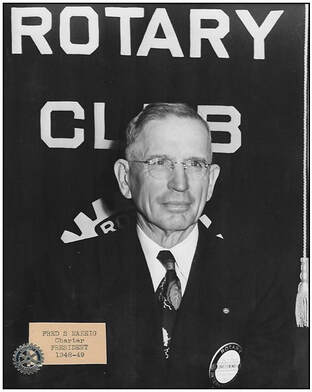 Fred Makeig, Rotary Charter President
Fred Sherwood Makeig boarded an immigrant train in McClennan County in 1904 and came to Moore County to work a farm.  He left behind his wife, Ella, and young daughter, Gladys.  They followed two weeks later, arriving by train in Channing, then came in a hack to Dumas.  According to Windswept Land, the Makeig history states “the weather was icy cold and to keep warm, hot bricks, were wrapped and placed around their feet.  Nothing, however, could keep the wind out.”

The land that became home to the young couple was four sections of land between Etter and Sunray near the Sherman County line filed on a year earlier by Mr. and Mrs. A. A. Lovvorn, Ella’s parents. The Lovvorns returned to central Texas and left the farm for the young couple.

The couple lived in a half dug out. A second daughter, Thelma, was born in that dug out during a blizzard with Dr. Anthony in attendance.
Later, the couple became parents to a son, S. L., and another daughter, Aliece.

The family moved into Dumas and built on of the first homes in the area east of the courthouse.

In 1908, Fred ran for County Clerk and served for eight years. He always kept his farming and ranching interests and after the time as County Clerk, re returned to that full time.

In 1926, then County Judge L. W. Wall died. His wife served out the remaining two months of his term, making her the first woman judge in Moore County.

Fred was urged to run for the position, was elected and served until 1934.

In 1939, he was elected mayor and held that position until his retirement in 1949. He faced the needs of a growing populations, the need for better sanitation, paving, and utilities. The city was in debt and had several outstanding scripts. All of the employees had been let go, except one man who took care of hauling trash (with his own truck) and was paid $100 per month.

Fred worked with city commissioners, Johnny Mills and Wiley Fox, and began to build a sound financial basis for the city.

Under their leadership, the city gas well was purchased in 1941 and revenue from the sale of gas was used to pay for the system. In 1947, the water system was purchased from Southwestern Public Service. This was one of Fred's proudest achievements. 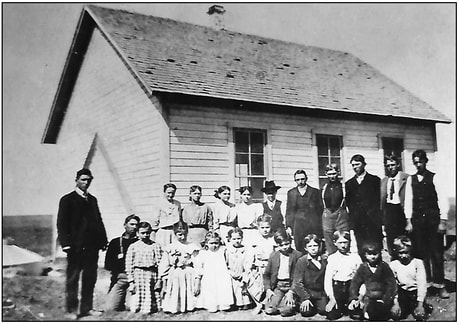 Fred Makeig, left, teacher at Middlewell School, early 1900s
Four blocks around the courthouse were paved and improvements were made in the police and fire departments. Sewer lines were laid and paid for by revenue from the utility.

The three worked with the War Production Board to secure a Caterpillar 112 motor grader to open drainage ditches, fill gas and sewer ditches and grade streets and roads. Dumas Avenue was paved.

Makeig was on the original board of directors for Rita Blanca Electric Cooperative and was instrumental in getting electricity to rural Panhandle counties in the mid-1940s.

Before his retirement in 1949, street lights were lighting up the town, a new high school and new city hall were built and a modern hospital was serving patients. The tax roll rose from $80,000 to $2,500,000.

In a tribute to Makeig on his retirement, W. R. Rutherford, publisher of The Moore County News, wrote "It was Makeig who had the nerve to publicly say to a powerfully entrenched utility company, that the gas that comes from beneath Dumas should be used to build Dumas." He went on to say, "It was Makeig who pioneered the first painful steps of administering the gas business and who, with fellow commissioners, toiled to get a fire department, basic street paving, sewer plant and the things that make a town. He served three years without a salary and nine more for a mere pittance of what would be paid a city manager. Makeig moved through the pioneering of a police department, the purchase of the water system and the installation of street lighting."

Rutherford concluded by saying all this was done without the loss of the city's credit or a raise in tax valuations. He also noted that it was done with a quiet perseverance of a man who loved, had faith in and believed in his hometown.

After leaving the mayor's office, he was elected to head the Moore County Hotel Corporation fund drive for construction of the Sneed Hotel, later known as Flying A Hotel.

​He was charter president of the Rotary Club, was an active Mason and served on the board at First United Methodist Church. He was a familiar sight mounted on a horse in the Dogie Days parade.

Fred died while on a fishing trip to Eagle Nest Lake, New Mexico, in 1950. He was 71 years old and had spent 46 years in Dumas and Moore County building large farming and ranching interests. But, it was in public service that his heart lay. He served during the formative stages of county and city government and helped build strong foundations for both governments.
More Bits of History