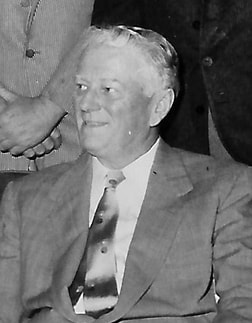 C. John Fowlston
"Brands, not necessarily cattle brands, are born of IDEAS, not facts," according to C. John Fowlston in an article he wrote in 1981.

"Ahead on a rise outlined by a full moon was a gaunt bare 64-foot wooden derrick devoid of any equipment. Said I, to John Fowlston that being me, somday I am going to own some Hereford horned cattle and a Derrick will be my brand."

Fowlston was working as a gas engineer in the oilfields in Oklahoma, but in 1925 came to Borger and worked for Shell Oil Company. His work in the oil fields took him to Puerto Mexico the following year, where he possibly developed a love of traveling.

It wasn't until the fall of 1933 that Fowlston bought his first herd of Hereford cattle and put them on a farm with Walter Pratt in Sherman County. Fowlston described the herd as "30 head of gaunt critters that were so thin they could not get up if they got down. They would have to be tailed up and would sometime charge you before eating the stalks in the field."

The Hereford ranch and the Derrick brand were beginning to become a reality when he and R. D. Field bought section 239 in Moore County and began raising wheat and pasturing his Hereford cattle.

Charles Sheldon came down from Sherman County farm to take care of the Moore County ranch.

In 1936 grasshoppers came to Moore County and destroyed crops. Fields decided against farming and sold his interest to Fowlston. In 1943, Fowlston and Sheldon formed a partnership that lasted until Sheldon died in 1987.

Fowlston married Syble Bolton in 1947 in Fort Worth and took a honeymoon cruise to Havana, Guatemala City and Panama, the first of many trips the couple would make during their 47-year marriage. The Fowlstons made their home in Amarillo, but also had a home on the Derrick Ranch and a fishing lodge on Conchos Lake in New Mexico.

The couple loved to travel and visited all 50 states and enjoyed many trips to other countries.

One trip was a six-day safari in 1965 and according to Fowlston, we were "deep in the Heart of Africa." During their trips, Fowlston would send detailed descriptions of their travels and the things they saw. Surprise gifts form the African safari were sent to Killgore Memorial Library and the Charles Sheldon family.

The gift to the library was a zebra hide obtained in Rhiodesa, Africa. The Sheldons received a water buffalo hide.

Fowlston made his dream of the ranch and Hereford cattle with the derrick brand a reality. Today the brand is carried on by Charles E. Sheldon at the Derrick Ranch, east of Dumas.

According to Fowlston in his 1981 article, "The latch strings are always out and the dogs are friendly to the well-intentioned visitor."

Compiled from the archives at Window on the Plains Museum