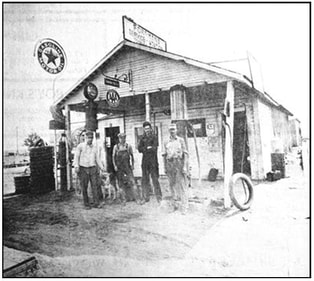 Foreman came to Dumas in July of 1928 and according to the story, was "just off the farm and at loose ends." He shortly got into the service station business at Dumas Ave. and Sixth, first as an employee and then as the owner.

The story says, "just sort of happened" into the service station business and ran it successfully for twenty years.

The station was at the northern edge of Dumas, a town of maybe 500 people at that time. "There was no paving, in town or in the county," Foreman recalled. His station fronted on an unpaved Dumas Avenue that was five to six blocks long, running from Second Street, south to Eighth, with few buildings along the way. Foreman's station was a frame building which sat by itself on two corner lots with a blank space to both the north and south. 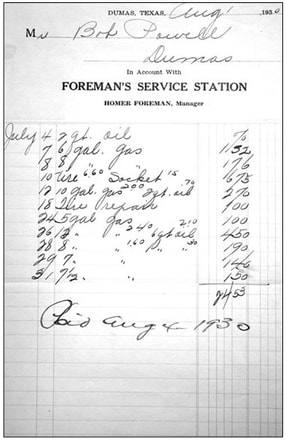 The station was one of four stations in 1928. John Mills operated one across Dumas Avenue from the Foreman station. Tom Snell had another and H. A. Tuck had the fourth.

Foreman and his wife, Ethel, came from the Spurlock Community in eastern Moore County. The couple stopped at the small station owned and operated by Jim Harris. The News-Press story relates, "Harris asked me if I would like to run the station. I told him I would as soon do that as anything else, although I didn't know anything about a service station."

Foreman went on to tell the story, "Harris said that was all right and we worked up an agreement where we both shared in the profits.."

The profits were not large, but the Foremans saved a part of them regularly and when partner Harris wanted out in a few months, Foreman became the sole owner. The service station was replaced by Foreman with a building that became TG&Y, then Levines Department Store. 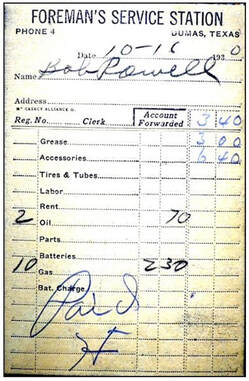 When the depression hit, Foreman recalled, "those were hard times. I don't guess there were more than 40 automobiles here, nor was there a foot of paving in the county."

Foreman made his first trip north of the Canadian River with his parents in 1896 when he was just four months old. The family settled in Hutchinson County near the location of Sanford Dam before moving to the Spurlock Community.

He served in France during World War I. He served on the Dumas school board and was tax collector for the school district for a time.