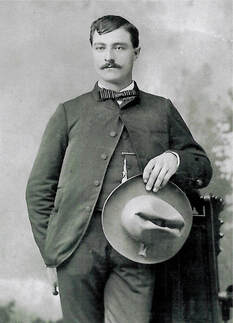 Sheriff W. H. Lewis
The first sheriff of Moore County, W. H. Lewis, came from Van Alstyne in Grayson County where, at age 21, he was elected town marshall. Lewis was acquainted with Louis Dumas, also from Van Alstyne, who probably encouraged him to come to the Panhandle and help form a new town.

Lewis had a revolver that was given to him by a friend, Jim East. "I think it was '91," recalls Lewis. The revolver was a worn .45 Colt and each time Lewis was elected sheriff, East would loan him the gun. "He was crazy about it as it if was a kid. He even talked to it," Lewis said.

"The fourth time I went back in office, Jim says, 'Will, I'm going to give you the gun for keeps. Reckon as how you're going to be sheriff for life. That's the gun that shot Billy the Kid. Never part with it'."

Lewis tells the story, "East was part of the Garrett posse who shot the Kid. It was before my time but I heard enough about the killing. The Kid's girl was supposed to have betrayed him. Garrett got in the house when the Kid was asleep and shot him as he lay in bed."

Stories vary as to what weapon Garrett was wearing the night he killed Billy the Kid and what really happened in the shooting. One story tells it was one of two pistols Wild Bill Hickok had on the day he was killed in Deadwood, Dakota territory in 1876. Garrett supposedly received the weapon from the sister of Hickok. In a biography of Garrett, it says his favorite weapon was a wooden handled Colt Frontier 44-40 revolver with a seven and one-half-inch barrel. He also possessed a carbine of the same caliber. The weapons were taken from BIllie Wilson, a co-hort of Billy the Kid.

Could East have misunderstood as to who Pat Garrett killed with the .45 Colt? The gun is still an important part of western history.

In an article in a Los Angeles county, Lewis recalled his work in law enforcement. "I never killed a person in my whole life. And I was sheriff 25 years. I got winged several times. Right through the neck once," as he pointed to the spot.

He goes on to recall, "I was big and heavy in those days. Sometimes when I was in a tough spot I'd say. 'Let's go to it' and we'd throw down our guns and pitch in. They didn't get away either."

The days when Lewis was sheriff, in Moore County and other places, were the days of cattle kings, huge ranches and cattle rustlers. It was common for men to stamp their brand on any unmarked maverick. Lewis was the first officer to arrest a man for stealing a maverick. The rustler went to trial, but according to Lewis, "He couldn't get a conviction. Most of the jurors were friends of the rustlers."

In an interview on the Lewis' 50th wedding anniversary in 1937, Lewis talked about the range fires and cold winters in the Panhandle. One story is of Mrs. Lewis who was riding in a wagon and found herself surrounded by a prairie fire. In an attempt to escape, she rode through the flames and lost a good portion of her hair. She was not badly injured and her hair did grow back.

Lewis remembers the Panhandle as "the coldest country you ever saw. One winter it was so cold that you could walk for 100 miles on the bodies of frozen steers. Snow drifted way over the corrals and chicken houses. It was a bad year."

Both the Lewis' grandson and great-grandson have visited Moore County and the museum to learn more about the former sheriff. The great-grandson, John A. Lewis, brought the .45 colt with him in 1998 and displayed it at the museum during his visit.

According to a story in the Moore County News Press in 1998, when the great-grandson visited and brought the gun, the writer describes the gun as being "heavy, but balanced. The six-inch blue steel barrel shows little wear of being drawn from a holster. The mother-of-pearl grips catch the light, shimmering blues, pinks and greens. It is a thing of beauty, and if the legend is true, a famous weapon of destruction."

The real truth of the pistol may never be know, but it makes an interesting story.

Compiled from articles in the archives at Window on the Plains Museum:
Articles from the Los Angeles County Circa and Moore County News Press
Election returns from November 1892, 1894, and 1896
Correspondence with John A. Lewis, great-grandson of the first Moore County Sheriff