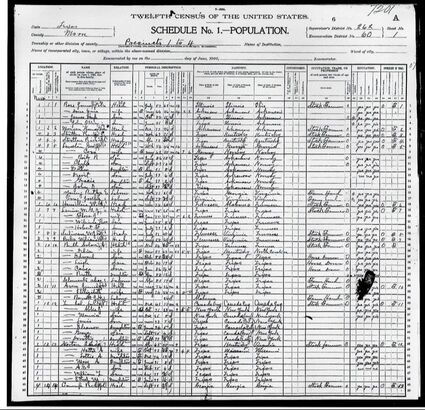 The first census of the Texas Panhandle was taken in 1880, four years after the Indians were defeated and confined on reservations. No inhabitants were reported in Moore County.

The 1890 census reported 1611 persons living in the 26 counties of the Texas Panhandle, 1188 males and 423 females. Most of the census is lost, only some end figures survived, which lists 15 persons in Moore County. There were nine Spurlocks living in Martin Canyon, and four or more Levertons in Evans Canyon. Dennis Bowman, Oscar McDowell, and Charles Record were also in the county in 1890.

In June 1900, a traveler noted the inhabitants of Dumas: one man and his family living about a mile out of town, with the postmaster and the county clerk as boarders. The wooden courthouse was shot full of holes, the windows were shot out, and the double doors were standing wide open. In winter, the traveler was told, the courthouse was often full of cattle. The ranchers wanted the county to themselves.

The hotel-office building housed the post office and a small store, where the postmaster kept less than a wagon load of general merchandise: a few red bandanas, brown and white cotton socks, axle grease, 1 case of canned tomatoes, crackers, sardines, a bucket of lard, a side of bacon, and Bull Durham and Star Navy tobacco. A school house with the chimney knocked off, a windmill out of repair, three privies, and a chicken coop made of a store box were all there was to Dumas in 1900.

Gus Gober, a farmer-rancher living on Blue Creek, wrote the names of the inhabitants on forms printed in a book 10.5 inches long, which was furnished by the government. Each page contained 50 numbered lines and 31 columns, which noted: name, relationship to head of the household, color, sex, birth month and year, age marital status, years married, mother of how many children, number of children living, birthplace, birthplace of father and mother, occupation, months unemployed, months attended school, can person read, write, speak English, home owned or rented, home owned free or mortgaged, home on a farm. And for immigrants, year of immigration to U.S. and if naturalized, number of years.

Gober had been in the county only two years, but likely knew "all of the people and houses, and most of the dogs in the county," as an old-timer said. As decreed by law, Gober took the census from June 1 through June 20.

Some data is illegible.

Residents lived in 52 houses, 6 tents (5 occupied by lone cowboys and one by a family of three), 33 single male households (average age 32 years), one household of two single males, four households of couples with no children and 26 households with children in the home.

Moore County had eight school teachers, all female. One was married, seven were unmarried. Thirty children attended school during the year.

Birth places of head of households listed on the census were 36 in Texas, 16 in Tennessee, 6 in Arkansas and New York, 5 each in Alabama and Mississippi, 4 in Kentucky and Missouri, 3 in Colorado, Georgia, Louisiana and Illinois, 1 in Indiana, Iowa, Virginia, Kansas and New Mexico. Also listed were two in Indian Territory, one in Norway, Canada and Scotland, four in England and two in Ireland.

​Compiled from articles in the archives at Window on the Plains Museum
U.S. Census records