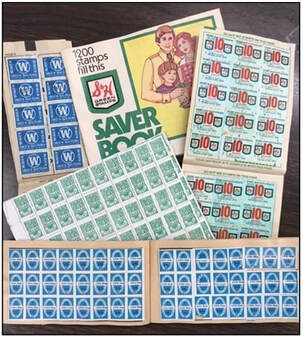 Grocery shopping in the 1950's and 1960's meant heading to the store on Wednesdays, grocery list in hand, to do the weekly shopping and earn double trading stamps on purchases! Trading stamps were given every day, but Wednesdays meant DOUBLE stamps.

Shoppers would receive trading stamps for their total purchase. The stamps would be saved in booklets and then redeemed for household items -- anything from a silver service, to linens, to tools and lawnmowers.

The most popular stamps in the Texas Panhandle area were S & H Green Stamps and Gunn Brothers Stamps. The stamps could be redeemed at stamp stores that had a wide selection of items. Catalogs were available so buyers could make their selections prior to shopping.

Trading stamps were similar to postage stamps. They had a gummed backing, were cut in perforated squares and were printed with a unique, colorful design. Some had serial numbers printed on them. An example of the value of trading stamps would be one stamp for each 10 cents of merchandise purchased. A typical book took approximately 1200 stamps to fill.

They were a marketing tool that began in 1891 in a store in Milwaukee, Wisconsin. The store gave the stamps to customers who paid in cash, an effort to limit credit use.

Following World War II, the use of trading stamps expanded when supermarkets began issuing them as customer incentives. By 1957, it was estimated that nearly 250,000 retail outlets were issuing trading stamps and nearly two-thirds of American households were saving various trading stamps.

Beginning in the early 1970's, the use of trading stamps began to decline. Gasoline stations stopped offering them due to the energy crisis and supermarkets began to spend more money on advertising lower prices.

The Little Shop in Dumas had its own unique trading stamps. The stamp was blue in color and was printed "Worthmore Trading Stamp" and had Little Shop  across the center. One stamp was given for each 10 cents in purchases. When the book was filled with stamps, it was worth $1.25 in trade at the store. The store featured English Leather toiletries for men, Henson-Kickernick lingerie, infants and toddler clothing and unusual gifts.

Another item in the collection of trading stamps at the museum is a pad of 5,000 trading stamps from Lone Star Thrift Stamp Co., Dumas, Texas. The stamp is green, printed with a star and two number 10's.

Ding Dong Daddy  stamps were given at several local  businesses and could be redeemed for items at participating stores.

Many households are still enjoying "free" items that were purchased with trading stamps.
More Bits of History