Dean Collins
An exhibit was featured at Window on the Plains Museum in 2019 and recognize the Dumas Youth Wrestling Club and its founder, Dean Collins.

The club was formed in the summer of 1978, and 42 years later, is still active today.

Dean Collins was one of the coaches and with his wife Letricia helped manage the club until his death in 1989. He was a native of Amarillo and participated in wrestling beginning in the seventh grade. He competed in every weight division during his career. Letricia passed away in 2013. According to Ivy Maye Porter, secretary and treasurer, "the Collins influence is still felt within the club, even in the new members."

At age 18, he tried out for the 1952 Olympic Team. Although he did not make the team, he competed in several levels.

He was the 1955 American Athletic Union Champion and won the Outstanding Wrestler trophy. The award was given to the wrestler who pinned his opponent in the shortest time. 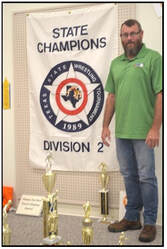 Mark Thornburg
Other coaches were Howard Miller, a minister whose son wrestled in Oklahoma; Brent Futrell, who had wrestled in college and Dave Calvert, a businessman interested in wrestling. The team started small with about 30 boys, but each year grew in numbers. The largest number of wrestlers was around 89 in 1984 from age 4 to 17. Today, the program has 58 members.

Team members competed in tournaments all over the area and won many championship trophies -- even a state championship in 2001.

Mark Thornberg started as a young wrestler with the organization and is now president and coach. The team follows the Texas USA Wrestling rules and competes in the West Region of the Panhandle.

The exhibit included some of the many team trophies, uniforms, programs, scrapbooks and photographs. 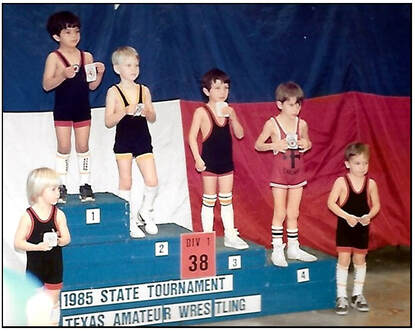