Celebrations of Old Timers Reunions held in the early 1900's were the beginning of what is now Dogie Days.

Residents gathered with picnic lunches on the courthouse grounds, spread them on the ground and enjoyed lemonade from barrels with spickets.

In 1947, the celebration changed from Old Settlers Day to Dogie Days. This was the first barbecue provided by area farmers, ranchers and the Dumas Rodeo Association. O. B. Thomas and Bob Brent were in charge of serving the meal. The meat was prepared in the same way it still is today: seasoned and wrapped in burlap bags one week before the day it is served, stored at about 38 degrees, cooked in a pit covered with tin and dirt. It was served with beans, onions, pickles, bread and apricots or peaches.

According to an article in the July 31, 1947 edition of The Moore County News, "Sponsors of the barbecue emphasize that it is not a free barbecue for the general public. To throw it wide open like that, would be to far exceed the ability of the sponsoring group both in the matters of labor and food." 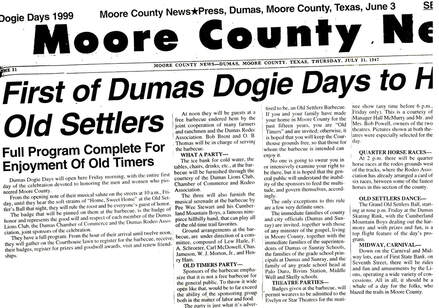 July 31, 1947 edition of Moore County News
The party was for "old-timers" and to qualify a resident had to have lived in Moore County for the past fifteen years.

Badges were given to "old-timers."  The badges would admit the wearer to the Evelyn or Star Theatres for the matinee show on Friday afternoon, courtesy of theatre manager Hall McMurry and the owners, Mr. and Mrs. Bob Powell.

Quarter horse races were held at the rodeo grounds located west of the railroad tracks. The rodeo association arranged a series of six races between "some of the fastest horses in this section of the country."

The Grand Old Settlers Ball started at 9 p.m. Friday at the Dumas Skating Rink. The Cumberland Mountain Boys played for the dance.

The carnival and midway was held on Seventh Street, east of the former First State Bank.

The celebration included lots of prizes for those in attendance:
According to the July Moore County News, "All in all, it should be a whale of a day for the folks, who blazed the trails in Moore County."

Compiled from archives at Window on the Plains Museum
July 31, 1947 edition of The Moore County News